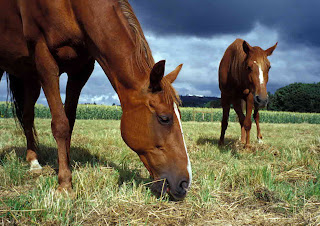 Also known as a bloodworm or redworm, Strongylus vulgaris is a dangerous parasitic roundworm of horses [1]. It has a global distribution, found in grasslands of all temperate regions of the world. This organism migrates throughout the horses’ arterial system for at least 4 months before it returns to the intestines to mature and reproduce [2]. While travelling, the nematode larvae damages mesentery and arterial walls, leading to various complications, usually boot clots [1], and diseases such as Adams’ Lameness (spinal nematodiasis) [4]. This parasite is found in areas where the horse population is heavily concentrated [1], and before effective medications were developed, it could be found in 90 to 100 percent of horse in the United States [3].

Symbiont Description
Strongylus vulgaris is a small parasite with the adult males ranging from 2.5 to 4 cm and the females ranging from 4 to 6 cm [3]. This stout worm is dark red in color due to the ingestion of blood from the host [5]. These worms do not have extensive social behaviors, with most of the interactions occurring in the intestines when mating is occurring [3]. It uses a buccal capsule with two hooked teeth to attach and feed on the intestinal wall, looking very such like hookworms found in humans. Its cuticle is made up of three or more layers secreted by the epidermis that aid in the invasion of a horse’s digestive tract. Also there are muscles that run longitudinally along its body.
Host Description
Because horses are found I most regions of the world, they remain susceptible to encountering this parasite. Horses also tend to travel in herds or are kept in groups, which increases the likelihood of becoming infected. Horses obtain this parasite from grazing in grass that has been contaminated by larvae, either from feces or even the soil. As long as there is not a period of drought and horse droppings are not broken up, the bloodworm will continue to be present in any given grazing field [1].

Life cycle
The reproduction begins when the female bloodworm releases pheromones to attract males [3]. The male then curves around the female genital opening and uses spicules to hold the female while his sperm swim to fertilize the females’ eggs [3]. Then the life cycle begins [1]…
 Eggs that are produced are passed with the feces of the horse. They remain in these moist and warm conditions where they soon hatch. It takes about two weeks for the larvae to reach the infective stage.
 When ingested, the larvae penetrate the lining of the intestines.
 They eventually migrate to the arteries where they burrow along the walls. This stage can occur for up to three months.
 During this time, they become “pre-adults”, ready to travel back to the intestines, where they form nodules in the intestinal arteries.
 After feeding for about 8 weeks, they reach sexual maturity and begin producing eggs, all the while sucking blood from the horse.

Ecology
The ecological impact of these organisms has the most influence on any horse population. It can cause death if untreated, which is usually the case for populations of wild horses [5]. It has an economic impact on horse farms. Many horse breeders closely watch the area that their horses graze. Once the parasitic larvae penetrate the intestinal wall, it migrates through the mesentery arteries. As it travels along the walls, S. vulgaris causes damage, most significantly lesions. These lesions can become severe enough to thicken the arterial walls resulting in blood clotting and eventually thrombosis. Furthermore, parts of the clots can break off, travel, and clot other vessels throughout the body. Death occurs when impairment of the blood supply in the intestines causing colic and the development of gangrene.
A Rendezvous in Space and Time
When in a contaminated field, S. vulgaris will continuously be present because it remains in its prime spot. It takes advantage of the free living stage of its life cycle to crawl on to the grass blades when the horses will be out to graze. There is no intermediary meaning no chance to get lost on its way to the final post. On the other hand, because it employs a 6 part life cycle, it increases the fitness of the organism. It spends months traveling around the body developing, never being in the same spot for a long period of time. Then it uses it morphological features (hooked head) to latch on to feed and reproduce for and even longer period of time.