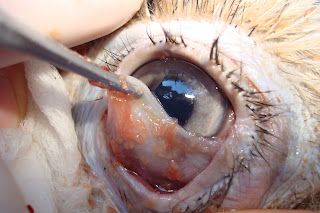 n referred to as the oriental avian eye fluke. It was once thought that this parasite was only found in the eastern part of the world but we now know that the parasite is found on almost every continent. P. gralli is found in most bird species ranging from ducks to pigeons to ostriches. The parasite is ingested through the mouth of a bird that feeds on aquatic vegetation. From there the parasite travels to its final resting spot in the conjunctival sac of the bird’s eye. Once the parasite is in the eye, the bird will experience severe watery discharge from the infected eye. Other common signs of philophtalmiasis include swollen eyes or a mild edema. Humans may also be infected by this parasite, but they are considered an accidental host. However, human cases have been found in the United States, Central Europe, the Middle East and Southeast Asia and Japan. [1]

Symbiont Description:
The oriental avian eye fluke is part of the genus philophthalmus and of the species gralli. P. gralli takes many different shapes throughout its life. When it finally reaches its adult stage, the fluke is fusiform in shape and is covered with spines. The body is elongated and rounded towards its posterior end. The trematode can grow to a size between 2.5 – 3.3 mm long and .5 – 1.2 mm wide. The parasite contains two suckers that help it travel though the body and against the flow of blood. The reproductive organs of both the male and female are found within the fluke itself in separate compartments. [5] [6] 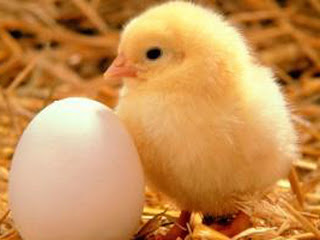 t: a snail. Thiara spp. and Melanoides spp. are believed to be two species of snails that are known to carry the parasite. From there the parasite reaches its finial host. The final host can be any number of birds. Research has shown an infection in ostriches in Zimbabwe [2] and baby ducks in Jordan [4] but those are not the only cases. An accidental host includes Humans, although this is not common. [1]

1.) The definitive host sheds the fully-embryonated egg into water by means of flushing the eye with water if it is a human host or by the body’s immune system causing the eye to water in avian hosts.
2.) Once in water the miracidia hatch immediately and penetrate the snail by two glandular ducts on each side of the apical gland
3.) The miracidia inside the snail turn into cercariae
4.) Snails release the cercariae and they began to form cysts on aquatic vegetation
5.) A wild bird or human becomes infected with the parasite when they ingest the metacercariae
6.) Inside the host’s mouth the cysts open and the parasite travels to the eye using its two suckers
7.) In the host’s eye the parasite lives until it is flushed out with water and then starts the cycle again [1] [5]

Ecology:
Philophthalmus gralli is mostly found in wild birds and the prevalence rate is different depending on specie type and country. The parasite can be found anywhere you find birds and so it is prevalent worldwide. The parasite has only been found in humans in a few countries including United States, Central Europe, the Middle East and Southeast Asia and Japan. The parasite is shown to cause blindness in birds if left untreated and it is not known what it does to humans. It is also unclear why the parasite choices the eye of the bird since the bird is a terminal host and will most likely not be eaten by anything other. It is also unclear as to what the parasite lives off in the eye. The parasite can be treated by flushing the eye out with water and because it is so easy to treat it is not likely to kill its host. There are currently no medications that can be taken to ride the human eye of the parasite. Economically the parasite can cause infections in ducks and chickens, which are consumed by humans. The infection can lower the number of chickens being sold and eventually if the number of infected chickens gets high enough the price of chicken may increase as well. [1] [3] [5]

An example of __________:
The parasite Philophthalmiasis gralli is a perfect example of how having more intermediate hosts’ increases the likely hood of infecting the final host. The snail being an intermediate host allows more parasites to infect it and thus the snails can provide a home for the parasites to grow in. The larger number of snails also allows for a large number of cysts to be added to the aquatic vegetation. This means that a single blade of grass can be infected with more cysts, which provided a better chance that the wild bird that eats that plant get infected.