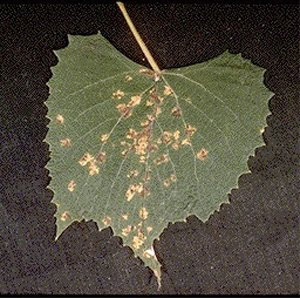 While some parasites have a direct influence on human populations because they use humans for hosts, others have an indirect influence. Guignardia bidwellii is one such parasite. This fungus is the cause of the disease known as black rot of grapes, and can have a severe economic impact on vineyards and other elements of the wine-making industry, as it can – if left unchecked – destroy entire fields of grapes. [3]

While other members of the genus infect different plants, Guignardia bidwellii causes disease in grapes. Most grape varieties are susceptible to infection, although the degree of susceptibility varies from cultivar to cultivar. The disease affects the entire plant, though it causes the most prominent damage in the fruits and leaves of the infected grape. [1] 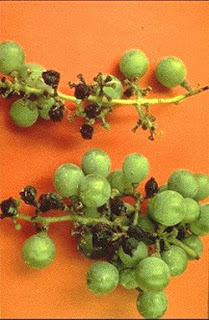 As shown in the above image, the life cycle of Guignardia bidwellii is relatively simple in that it uses only one host. Infection begins when the fungus’s ascospores are released into the air, carried by raindrops landing on a previously infected fruit. The ascospores are carried to a nearby uninfected plant. When the ascospores land on a developing fruit cluster, the actively infected berries will eventually become shriveled and black; these are referred to by grape growers as “mummies”. Each mummy contains the fruiting bodies of the fungus, called perithecia and pycnidia. The perithecia will winter in the mummy and develop ascospores that are ready to be released during the rains in the following spring.

Should the ascospore land on a growing leaf or shoot, their developmental course will vary slightly from the process that has been described. There the ascospores will form lesions; within each lesion are clusters of pycnidia. Rather than going dormant for the winter, these pycnidia will produce pycnidiospores, which disperse to infect additional plants. Eventually these pycnidiospores will land on a fruit cluster and the mummy-and-ascospore formation process will begin again. [3] 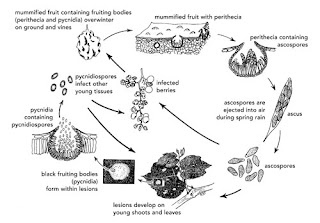 The most prominent feature of Guignardia bidwellii’s ecological impact is its effect on grape growers. As is described in the life cycle, during its infectious stage the fungus causes clusters of infected grapes to shrivel; they are then useless to the grower. In some regions, such as the Ohio River basin, where there is a high level of humidity, it was formerly impossible to grow grapes commercially due to the prevalence of the fungus. Although chemical controls have been developed that are effective against the fungus, it still poses a significant threat to the crops of organic farmers. [3]

An Example Of: How A More Complex Life Cycle Can Enhance Fitness; Use of Vectors

As described above the “mummies”, or infected grape clusters, shrivel and remain on the grape vine over the winter. Once rainfall begins, the raindrops become the fungus’s vectors, releasing stored spores that infect new regions of the same plant or neighboring plants. [2] These traits combined allow a maximum spread of infection during climate conditions favorable to the fungus and allow it to establish itself.

4. http://www.nysipm.cornell.edu/factsheets/grapes/diseases/grape_br.pdf
Posted by Ellen Maffeo at 2:20:00 AM