Acanthamoeba: You Won’t Even See It Coming

Acanthamoeba: You Won’t Even See It Coming
My face frozen in a contorted grimace, I could still make out the blunt steel needle closing in on my eye. 'Keep still, and open your eye as wide as you can,' said the doctor, as she scraped a sample of tissue from my cornea. Even with an anaesthetic drop in my eye, I could feel a sharp pain as, for several excruciating seconds, the metal rubbed against one of the most delicate areas of the body. I had to fight all my instincts to keep my head perfectly still. The doctor, nervous herself, drew back with what looked like a small piece of curled cellophane. I took my head out of the chin support and breathed for the first time in what seemed a very long period [1].
Introduction:

The excerpt above is from an online news publication established in the United Kingdom. The author was told by her optician that if she did not keep her contacts clean, she would put herself at risk of contracting a “bug”, in this case Acanthamoeba Keratitis [1]. A. keratitis infection primarily occurs via the use of contact lenses, in particular poor contact hygiene (i.e. wearing contacts lenses while swimming or showering). Acanthamoeba causes three illness involving the eye (Acanthamoeba keratitis), the brain and spinal cord (Granulomatous Encephalitis), and infections that can affect the entire body (disseminated infection) [2]. A. Keratitis is not actually a bug, but rather an amoeba- a microscopic, unicellular eukaryotic organism that uses pseudopodia as a means of motility [3]. A. Keratitis resides in the cornea where it feasts on the proteins of the eye and bacteria that get trapped. Unfortunately, the immune system is unable to fight the parasitic invader because the cornea lacks blood vessels. Eventually, Acanthamoeba burrow into the eye, which leads to vision loss. 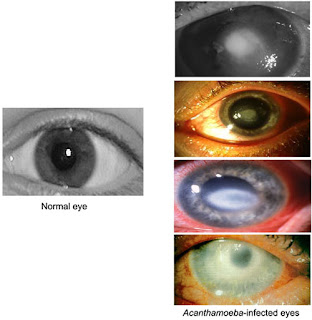 Acanthamoeba is a type of free-living amoeba typically found in the environment. As stated before, an amoeba is a single-celled eukaryotic organism that lacks a set shape and travels from place to place using pseudopodia, which are projections of the cell (“false feet”). True to its eukaryotic nature, amoebae contain organelles encased in a cell membrane. It ingests nutrients using phagocytosis, which is a process characterized by the cell membrane forming projections that extend and surround a food particle until it is completely enclosed . Thereafter, the particle of food is encased in a vacuole, which digests it [3]. A. Keratitis feeds on the cornea of the eye- a transparent, complex of tissues consisting of proteins and cells that cover the outer surface of the eye. The cornea lacks blood vessels with which to protect the eye or provide nourishment. Instead, the cornea receives nutrients from the tear ducts. When the innermost layer of the cornea, the endothelium is destroyed, the cells cannot be repaired and blindness results [4]. A. Keratitis is partial to the cornea because without a steady flow of blood or lymph fluid, the immune system cannot attack a pathogen that infects the eye; thus, the parasite can eat and reproduce without the fear of attack. 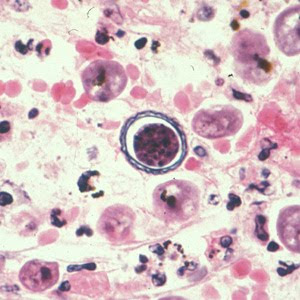 Acanthamoeba Keratitis is a free-living amoeba. It does not use an insect vector for transmission. A. Keratitis affects the human eye by water. Water is a hot commodity for humans; thus, A. Keratitis is spread via recreational pools, soil, sewage, air conditioning ventilation units, vegetables, and lakes to name a few. However, only one or two individuals out of a population of one million will contract A. Keratitis [6].

Keratitis has only two stages in its life cycle. It forms cysts which develop into infective, mobile trophozoites (a growing phase of the amoeba). These trophozoites travel through a water source and reproduce via mitosis. The trophozoites enter the hosts via the eye, where they secrete proteins that break down the cornea’s surface allowing the amoebae to burrow into the tissue. The parasites then feed on the tissues of the host’s eye as well as bacteria on the eye. During this process the host is likely to experience pain, redness, swelling, blurred vision, and in some cases blindness [6].

While A. Keratitis is rare, the impact it can have on its humans is devastating. Of the people who contract A. Keratitis in the United States 85% of contact users. Although, it is spread via water, using contacts properly can significantly reduce the risk of infection. Currently, there are no reports of A. Keratitis being spread from person to person [2].

Monsters Inside Me: A. Keratitis [8]

Monsters Inside Me: Parasites Invade Eyeball [9] 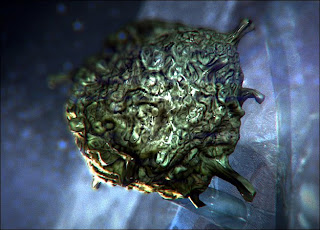 An Example of “Escaping Host Defenses”

According The Art of Being a Parasite A. Keratitis would have won the first round because it successfully establishes itself inside of a host. A. Keratitis escapes detection by the host’s immune system by inhabiting an organ that lacks blood or lymph vessels. In other words, A. Keratitis hides in organs that are classified as non-immunogenic, meaning that the organ does not have the ability to recognize a pathogen and induce an immune response [11].