Introduction: Imagine finding a small spot on your arm, perhaps one that resembled a bug bite. Normally, a person would just apply an antiseptic and throw on a band-aid without raising too much concern. Or they might do nothing in hopes that it will go away on its own. But what if that lesion never went away? In fact, rather than heal, the irritated patch of skin started to expand and become more grotesque. 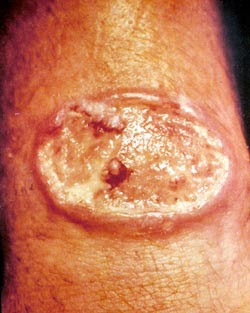 Hopefully, you would have access to adequate healthcare so you could see your doctor immediately. But for dramatic effect, pretend there are no doctors around. You can only treat the wound by washing it with unclean, contaminated water and using whatever resources you already possess, which isn't much. To your disappointment, nothing seems to stop the sore from growing and you even notice a familiar lesion starting to erupt on your cheek. Unfortunately, the sore on your face begins to cover larger areas. And soon it starts to eat away at the cartilage in your nose and soft tissues of your mouth, leaving horrifying disfiguration. There's some invisible entity eating away at your face and you are hopeless to its powers.

[2]
The disease is leishmaniasis, which is caused by a parasite. It is internationally endemic and as many as 2 million cases arise annually [3]. Female phlebotomine sandflies are the zoonotic vectors for the parasite that transfer the protozoa to vertebrate hosts. Dozens of species exist and each cause their own disease. Leishmania brasiliensis causes muccocutaneous leishmaniasis (or espundia), a condition in which the protozoans eat the soft tissues of its host's head, creating great disfigurement in its victim's face [4]. While L. brasiliensis is prevalent in Latin America, other forms remain endemic in both the Old and New World [5]. Visceral leishmaniasis causes damage to internal organs and is usually caused by L. donovani in humans. Dogs are reservoir hosts to L. infatum and also fall victim to cutaneous and visceral leishmaniasis.

[6]
The species Leishmania is in the family Trypanosomatidae and the order Kinetoplastida. Leishmania and Viannia are subgenera that differ based on where they develop in the sandfly digestive tract [7].

[8]
Leishmania tropica is primarily in urban areas while Leishmania major is more prevalent in dry deserts. These two genera of Leishmania are responsible for "Old World disease", meaning those that afflict people in the Eastern hemisphere countries of Africa, Asia, and Europe. Subgenera of L. tropica and L. major cause forms of cutaneous leishmaniasis [5]. Western hemisphere species include L. braziliensis and L. panamensis/guyanenis, in which different strains cause either cutaneous or muccocutaneous disease [7].


Host Description:The Leishmania protozoan parasite inhabits the macrophages of its host. The Leishmania parasite has a motile form, known as the promastigote stage. It has an anterior flagellum while it develops in the sandfly. Female sandflies serve as the biological vectors and are from the genera Phlebotomus or Lutzomyia. Sandflies are active in humid weather and remain active at dawn, dusk, and at night. Arthropods, such as ticks (Dermacentor variabilis and Rhipicephalus sanguineus) may be mechanical vectors that can be involved in rare transmissions of the disease between dogs [9].
The other form of Leishmania, the amastigote, is non-motile and can withstand the acidity of the lysosome once it invades its vertebrate host. The amastigote causes disease in humans and dogs by affecting cellular immunity [5]. Cutaneous and visceral leishmania has also been reported in other types of domesticated animals, animals in captivity (zoos), and wild animals, which are the main hosts for the sandflies. Humans and dogs/domesticated animals are the accidental hosts [9].

Ecology: Leishmania exists on all continents, excluding Antarctica. It remains endemic in tropical and sub-tropical areas, while the main occurrences of human disease are in Africa, Asia, the Middle east, Latin America, and around the Mediterranean. Wild animals and sandflies maintain the parasite's life cycle, while infections in domesticated animals and humans are accidental. L. donovani and L. tropica are adapted to infect humans [9].
Cutaneous and visceral leishmaniasis are the two forms of the disease that arise following infection. In cutaneous leishmaniasis the skin is affected and depending on what species of Leishmania, the lesions can have different characteristics. Ulcers, smooth nodules, flat plaques, or hperkeratoic warts are some characteristic symptoms for leishmania. Infections can be localized on the skin or spread lymphatically. A sub-type of muccocutaneous leishmaniasis usually occurs in Latin America. The initial symptoms are redness of skin, ulcers around the nose and nosebleeds as the parasites cause mucosal damage to its victim. Often, seven facial disfigurement occurs because mucocutaneous leishmaniasis does not heal on its own.
Visceral leishmaniasis is more chronic and prevalent in its endemic areas. Travelers are at risk of contracting this disease when visiting endemic areas. Initially, a primary granuloma appears on the skin. Undulant fever, weight loss, decreased appetite, anemia, abdominal distension, and splenomegaly and hepatomegaly are symptoms of this disease. Post-kala azar dermal leishmaniasis (PKDL), occurs in some recovering visceral leishmaniasis patients (from L. donovani). The syndrome can be identified by a macular or nodular rash that forms around the mouth and spreads. This is common in Africa and arises six months after a person is afflicted with visceral leishmaniasis [9].
Leishmaniasis is a seasonal disease and remains most active in warm months. Although 1-1.5 million cases of cutaneous leishmania and 500,000 visceral leishmaniasis occur worldwide, but this is probably an underestimate since many cases probably go undiagnosed due to lack of medical availability. The fatality rate for untreated leishmaniasis is 75-95%, a scary statistic since many people do live with the disease and do not pursue clinical treatment. Even after the disease is treated, the symptoms can reemerge in immunosuppressed patients [9].

An example of: Similar to diseases like malaria, leishmaniasis is an example of vector borne transmission. It relies on the activity of the sandfly to transmit it to its vertebrate host. It also exemplifies rhythmic emergence. The sandfly only feeds when it is dark, so the animals it infects are active during that time. The fly is dormant during the winter so it remains in its host during that time.