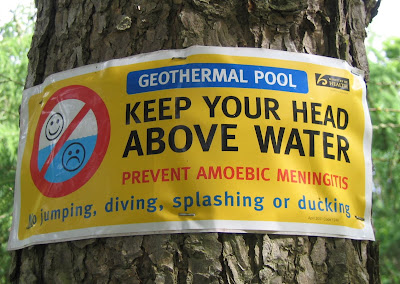 Have you ever gone swimming in any warm freshwater lake, river, or hot springs recently? Perhaps Lake Lanier? If your answer is yes then I am sorry to inform you but there is a chance you are infected with Naegleria fowleri (N. fowleri)! Better act quickly because this infection is deadly and usually causes death within 1-12 days! However, before I scare you too much, there is some good news. Our body does a pretty good job of fighting the encounter with the parasite before it can actually lead to infection. Between the years 2000 to 2009 only 30 infections were reported in the U.S [1]. That is a low number considering the high exposure one has with this interesting parasite.
It is very common but rarely causes disease. N. fowleri is a free-living ameba that is found in warm freshwaters all around the world. The primary disease caused when infected is primary amebic meningoencephalitis (PAM). It is very rare but an extremely serious disease with a 95% mortality rate. There are several treatments that include: amphotericin B, rifampicin, and miconazole [2]. Unfortunately almost all patients die. Image: [3]

N. fowleri is a member of the subphylum Sarcodina and superclass Rhizopodea. The superclass Rhizopodea includes several species of amebas. The genus Naegleria includes several species, however, only N. fowleri is known to produce human disease [2]. N. fowleri is a free-living organism, meaning that they can survive without a host. This is a great advantage to the parasite and explains why their attacks are fatal [4]. Hosts are necessary for survival of parasites that are not free-living. They have to think twice before killing the host. N. fowleri, on the other hand, can survive without a host and so do not have to avoid killing them.

An interesting aspect of this parasite is that it has both a flagellated and unflagellated form. More specifically it has two flagella. During the flagellated stage it does not feed. In laboratory tests, N. fowleri loses the flagella when placed in distilled water. The ameba gains the flagella again when there is a change in the environment. During unfavorable conditions the amoeba can also form cysts and this allows it to survive harsh conditions. Image: [5]
Host Description

For parasites like N. fowleri that thrive in oxygenated environment, the brain, which is oxygenated tissue, is the perfect home. However, finding a way into this nurturing environment is a challenge. 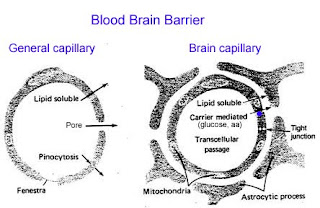 The brain has an especially more protective barrier called the blood-brain barrier.This barrier is made of cells that make a tight seal along blood vessels that prevent mostly everything from the bloodstream, which includes brain parasites like N. fowleri, from leaking through [6]. Unfortunately for us, N. fowleri rise up to the challenge very well. So how do they enter the brain? [Image [7]

The parasite attaches to the inside of the host’s nose and follows the olfactory nerve path to reach the brain. When it has reached the brain, the damaging effects commence. N. fowleri crosses the barrier by actually eating the nerve cells.This is obviously very bad for the host and is the main reason for the rapid death. The parasite has surface proteins that allow it to cut a hole in the covering of the cell. When it pierces the hole the contents of the neuron leak out and the parasite feed on the nutrients it contains. Furthermore, this special parasite has proteins that are able to sense the presence of certain nutrients, and this causes it to send signals to the rest of the cell indicating in which direction the parasite should move to eat those nutrients [6]. 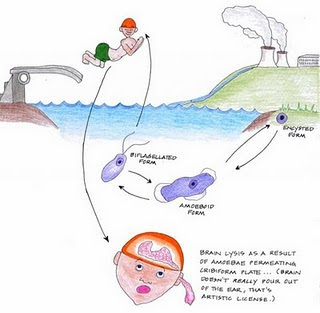 The human body cannot detect the intrusion of the parasite in the brain because the parasite is able to avoid detection by another set of proteins called CD59. This prevents the parasite from being taken up by phagocytes or being destroyed [4]. In addition, there are other proteins on the surface that direct the parasite to the most vulnerable areas of a neuron [6].Basically this parasite has evolved its own GPS system of the human brain! What can our body do when our mind is being eaten alive? Image: [8]

Well the human body does a superb job of preventing the parasite from even getting so close to the brain and it does so by using snot! A primary defense of the body is to secret mucus so that the parasite cannot adhere and move up the nose. N. fowleri again rises up to this challenge by producing enzymes to digest the mucus, this process is called mucinolytic activity [6]. In the competition of mucus production versus the mucinolytic enzyme effectiveness the body does an exceptional job of trapping the parasites. This is supported based on how often we are exposed to this parasites and how often they actually cause infection.

The life cycle of N. fowleri has 3 stages. In the ameboid trophozite stage, the parasite feeds on bacteria and replicates through binary fission where the nuclear membrane remains intact. Replication can only occur in this stage. This is also the stage where human infection can occur. When there is a change in ionic concentration the

trophozite changes to a flagellate form. This is reversible and they will change back when conditions are back to normal. During the flagellated form, the parasite does not infect humans. When water temperature decreases and become very unfavorable N. fowleri encyst and this allows them to survive the winter until the next summer comes around [9]. Image:[10]
Ecology
N. fowleri is a free-living amoeba found all around the world. They live anywhere there is warm freshwater, like lakes, rivers, or geothermal (naturally hot) water sources. N. fowleri can also be found in swimming pools that are poorly maintained. This parasite is not found in the ocean or any other salt waters. Most of the infections have occurred during the summer months of July, August, and September and mainly in the southern states [1]. One of the reasons it has not become more prevalent is that it cannot be spread from person to person [11]. It is only spread through nasal contact with water infected with the amoeba. N. fowleri causes PAM, which is a brain infection that leads to the destruction of brain tissue. Their symptoms are similar to bacterial meningitis in its early stages. Aggressive treatments with amphotericin B and miconazole have proven positive for effectiveness in labs, however again the treatment and diagnosis is 95% of the time too late. With proper education to the public it can be caught early enough to use the treatment options [2].

Some signs and symptoms of infection include stiffness, cramping and pain in the muscles of the back and neck. Weakness, severe headaches, seizures, nosebleeds, rapid and shallow breathing, swollen and painful lymph nodes is possible. Decreased appetite, loss of smell and problems tasting food, confusion, hallucinations, and difficulty with concentration may also be associated. [11]. Video: [12]

An Example of the Host’s Two Lines of Defense

N. fowleri’s host, the human body, displays the perfect example of the concept of a host having two lines of defense.The first line of defense is avoiding the parasite by appropriate behavior. If the encounter still does take place, the second line of defense is immunity, which is basically to expel the intruder. 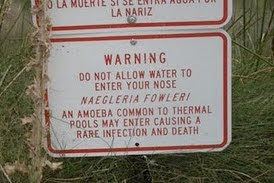 Humans have the advantage of avoiding the parasite just by having the ability to read and make signs. Freshwater bodies of water more susceptible to N. fowleri have signs and display warnings to recreational water users to beware of the ameba. Keeping the nose plugged with nose plugs is just one simple tactic to avoid an encounter with this brain-eating parasite. If the encounter does take place, the body has internal defenses (the second line of defense) such as increasing mucus production that prevents the parasite from moving up the nose and reaching the brain. However, the host is good as dead if the parasite is able to pass this line of defense. Once it has reached the brain, N. fowleri begins the prompt degeneration of brain tissue and rapid death follows [6].

So the next time you decide to go swimming in any warm freshwater lake make sure you bring nose plugs. You do not want Naegleria fowleri swimming up your nose and eating your brain! Image: [13]