Onchocerca volvulus: Another Price of Poverty

Introduction:
Onchocerca volvulus (O. volvulus) is a type of nematode that parasitizes black flies and humans. The roundworm can be found globally with a higher concentration in Sub-Saharan Africa. The areas affected by the parasite are all located near fast-flowing streams and rivers. When found in subcutaneous tissues, O. volvulus causes Onchocerciasis, more commonly known as river blindness, in humans [1]. The disease can result in but is not limited to blindness. Other common symptoms include epilepsy, severe itching, disfiguring skin nodules, and sleeplessness. If the parasite is found in the lymphatic connective tissues, it can cause effects similar to those seen in elephantiasis such as inflammation of regional lymph glands which is highly prevalent in the scrotum [2].
[3]
Symbiont Description: 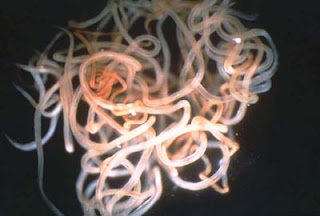 [4]
Onchocerca volvulus' genus can be derived from the Latin prefix Oncho- meaning "hook" and the suffix -cerca meaning "tail." The species is derived from the Latin word volvere meaning "twist around." The parasite has a worm-like appearance and has an array of sizes during different developmental stages. O. volvulus reproduces sexually, requiring both a male and a female for reproduction. Females are typically larger and longer than the male reaching a length of 33 to 50 cm while the male can range from 19 to 42 cm [5]. The reproduction of larvae occurs at a rate of about one thousand larvae per day [6]. As with other nematodes, the bodies of O. volvulus' are covered in sensory bristles and papillae. They are sometimes found in peripheral blood, urine, and sputum but are most commonly found in the skin and the lymphatics of connective tissues [5].
Host Description: 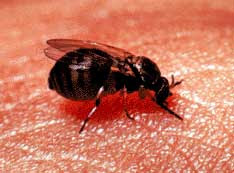 [7]
O. volvulus is highly specific for a particular genus of black flies: Simulium. The parasite is typically found in the environment where its host is found: fast-flowing streams and rivers [1]. This is where the black fly lives and breeds. Female black flies must take a blood meal in order to ovulate [8]. Much like mosquitoes, black flies are hindered by platelet formation and blood clotting during the extraction of blood. For this reason, they also excrete the anticoagulant apyrase. Unlike the Plasmodium that infects the mosquito, O. volvulus does not decrease the release of apyrase during the insect's blood meal but actually increases it [9]. The black fly acts as the vector (intermediate host) to get to the final host which is the human. Humans are susceptible to infection because in many rural villages, there is only one source of water. This source of water is usually used during the day by the villagers and this is precisely when the black fly feeds. Infection of humans usually requires more than one bite which is very common since most individuals in areas affected by black flies are bitten a minimum of 25 times a day.
Life Cycle:

[5]
Interestingly, the life of O. volvulus adult is dependent on the parasitic Wolbachia bacteria [10]. Wolbachia is found in the cytoplasm of some filarial nematodes and can become, as in the case of O. volvulus, a crucial mutualist in the fertility of female nematodes [11]. Possible treatment plans for humans involve killing the Wolbachia [10]. The parasitic third-stage filarial larvae is first passed to the human via mere physical contact between an infected black fly and a human. Once inside the human, the larvae develop into adult filariae in subcutaneous tissue. The adults live within nodules formed under the skin. The adults can live in these nodules for a total of 15 years. Again, a black fly takes a blood meal, this time infected with microfilariae. Once inside the black fly, the microfilariae travel to the midgut then hemocoel and finally to the thoracic muscles. The microfilariae develop into first-stage larvae and eventually third-stage infective larvae. These third-stage larvae then travel to the black fly's proboscis and infect a human when the fly takes another blood meal [5].

Ecology:
O. volvulus is worldwide in nature. It is found in Africa, Yemen, and several countries in the Americas (Mexico, Guatemala, Ecuador, Columbia, Venezuela, and Brazil). River blindness, the resultant disease of the parasite, infects 18 million individuals worldwide with 125 million people at risk of becoming infected. 99% of all cases occur in Africa. The disease is only second to the infective disease trachoma in causing blindness [1]. There is no vaccine for river blindness but there is a partial cure. The pharmaceutical company Merck & Co. have freely provided the drug ivermectin which causes the death of the O. volvulus progeny but not the actual adults that reside in nodules. However, this is substantial because the symptoms of the disease are produced by the progeny rather than the parents. Treatment of the disease must be consistent, only one pill per year; nonetheless, the pill must be taken for up to 15 years [6].

Class Example:
O. volvulus treatment is an example of the disparities of health care discussed by Paul Farmer in the MIT video shown in class [12]. Merck & Co. have made the drug responsible for the termination of O. volvulus progeny economically accessible: it is free. Still, the disease runs rampant being classified as endemic in certain countries [3]. All of the nations affected by the parasite are undeveloped ones. This is probably partially due to the rural communities; but also due, in part, to the lack of priority towards the disease in poor countries. The Center for Disease Control classifies river blindness as a Neglected Tropical Disease (NTD). Because of the disease's lack of popularity (unlike HIV and malaria), the disease will not be controlled although it easily could be via mass drug administration (MDA) [13]. Due to the lack of global awareness, efforts to control the black flies, to implement MDA, and to improve basic living conditions will not be fully realized. As said in class, the concept of helping the world is easy, but the logistics involved in actually making it happen are the difference. And in the case of O. volvulus, it's the difference between sight and blindness.
[14]