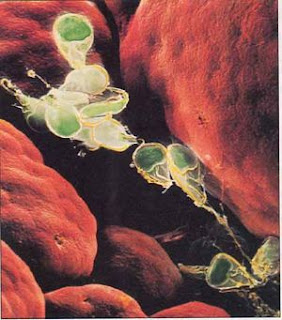 Giardia lamblia is a single-celled protozoon. This parasite moves with the aid of five flagella. Giardia lamblia causes Giardiasis which is the most frequent cause of non-bacterial diarrhea in North America. This is the most common intestinal parasite disease in North America. Many developing countries come into contact with this parasitic disease. Some symptoms that one may experience include diarrhea, abdominal pain, nausea, gas, and fever. For some children, this disease can affect their physical and mental growth, slower their development, and cause malnutrition. [1]

Giardia lamblia
Giardia lamblia is a rename for Giardia intestinali and Giardia duodenalis. It was renamed in 1915 in honor of Professor A. Giard of Paris and Dr. F. Lambli of Prague. [2]. The parasite is from the phylum Metamonada which is the group of flagellate protozoa. The genus Giardia is widespread and infects many different species. [5]
The genome of the parasite consists of five chromosomes and the sizes range from 0.7 to over 3 Mb. It has a tear-drop shape and measure ten-fifteen um in length. Their shape is important for differentiating between species. These parasites do not consist of mitochondria, endoplasmic reticulum, or lysosomes. [2]

Host Description
This parasite is widespread because it infects humans and other mammals. Many children are infected by this parasite also. It infects about 6-8% of children and 3 % of adults. People come into contact with parasite, most often, through contaminated water. This disease may be passed on when a human contacts another human or an animal. Men who have sex with other men are at a greater risk of getting infected. Just like other diseases, travelers are most likely to be at the greatest risk because of the traveling to other countries where Giardia might be common. [1]

Life Cycle:
The Giardia lamblia consists of a two-stage life cycle. It contains the trophozoite and cyst. Cysts can survive in water for ever several months.
• Contaminated water, food, or hands with cysts is ingested by people of mammals.
• In the small intestine, excystation occurs and releases trophozoites. One cyst produces two trophozoites.
• Trophozoites multiply by binary fission in the small bowel where they can be free or attached to the mucosa by ventral sucking disks.
• In the colon, encystation occur and cysts become infectious.
Cysts are the most common form found in the nondiarrheal feces. Since the cysts are infectious in the stool, person-to-person transmission is possible. [1]. The main food source for this parasite is glucose which is obtained by diffusion or pinocytosis. [2] 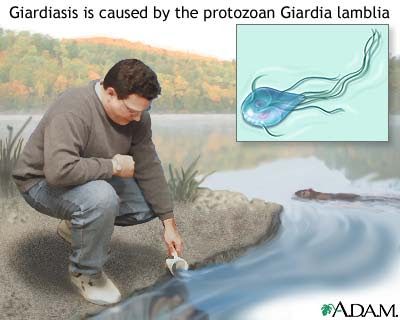 Giardia is worldwide. It can be found in soil, water, food, and surfaces that have been contaminated with feces from infected humans or animals. [2] The parasite cannot be transmitted and infect someone through the contact of blood. They don’t invade tissues but adhere closely to the lining of the small intestine [2]. Cool, moist areas increase the survival of these organisms [3]. Statistics have also shown that infection rates are higher in the summer than any other time of the year.
There is treatment available for this parasitic disease. Some medications that can help treat the disease include metronidazole, tinidazole, and nitazoxanide. [1]


An example of Giardia lamblia
Giardia lamblia can be an example of how the host has both lines of defense: for encounter and compatibility. The host has defenses that will help it from encountering the parasites. One can close the encounter filter through better hygiene and education. If people do not drink contaminated water or eat contaminated food or clean surfaces, then the spread of the parasite would lessen. This will help avoid the parasite from contacting humans and other mammals. If the first line of defense works, then the parasite is destroyed in the environment and the host does not get infected. However, if the host does encounter the parasite, then it needs to find a compatibility filter. Here the parasite can be fought through vaccination and treatment. There are several medications that help treat Giardia lamblia. These defenses decrease the parasite from spreading worldwide. [4]

Websites
[1] - http://www.cdc.gov/parasites/giardia/gen_info/index.html
[2] - http://microbewiki.kenyon.edu/index.php/Giardia
[3] - http://www.fda.gov/food/foodsafety/foodborneillness/foodborneillnessfoodbornepathogensnaturaltoxins/badbugbook/ucm070716.htm
[4] – Combes, Claude. The Art of Being a Parasite. Chicago: The University of Chicago, 2005. 12-15.
[5] - http://en.wikipedia.org/wiki/Giardia#Systematics
Posted by Monica at 1:39:00 AM