The Anglerfish and Her Pyrotechnic Display: 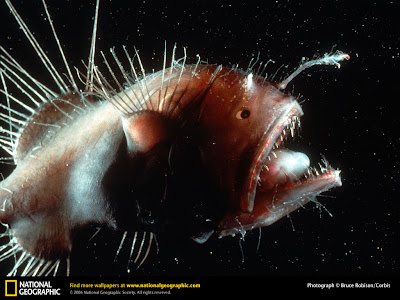 The anglerfish is a large group of more than two hundred species of deep sea-dwelling fishes of the order Lophiiforms. Anglerfish are generally less than a foot long, but may reach lengths of up to 3.3 meters [1]. They appear dark gray to dark brown with enormous heads that are loaded will numerous sharp, invisible teeth. One of the most interesting features of the anglerfish is its method of reproduction. The male anglerfish is much smaller than the female and when it encounters a mate, the male anglerfish fastens on by means of its mouth [1]. Gradually, the male is absorbed by the female until the only organ remaining is the testes. This ensures that when the female anglerfish releases her eggs, she will have a ready supply of sperm [1].
These unique fishes are found in the Atlantic and Antarctic oceans in the bathypelagic zone which extends from 1,000 to 4,000 meters below the ocean’s surface [2]. The problem that most organisms face at this depth is the limited amount of sunlight that is capable of reaching this layer. Inevitably, this makes capturing prey and avoiding predation a very daunting task. However, Lophius piscatorius is a model species of this large group of anglerfish which utilizes a long, bioluminescent rod that extends from above its mouth found only on the females [1]. This rod, which is actually an extension of a dorsal spine, is home to a colony of bioluminescent bacteria that enable L. piscatorius to easily lure curious prey towards its plethora of razor teeth [3].
Description of the Relationship:
The relationship between the anglerfish and its bioluminescent bacteria can most clearly be defined as mutualism in which both partners benefit from the relationship. The presence of the internal mutualist bacteria allows the host anglerfish to capture prey more easily, while the so-called fishing rod that houses the bacteria provides a nutrient-rich environment for the bacteria to flourish [4]. Presumably, this organ has openings to the ocean that allows the bacteria to colonize and form a very specific relationship. For example, while it is still unknown which bacteria colonize the specialized dorsal fin of the anglerfish, other relationships between bioluminescent bacteria and deep sea fishes suggest that only one bacterial species is involved [4]. Genetic data provided by Haygood (1993) suggests that the bioluminescent bacteria are most likely from the genus Vibrio which produces bioluminescence through quorum sensing [5].
Quorum sensing functions to produce bioluminescence in many bacterial colonies by manufacturing the necessary cellular products to generate luminescence only after a particular threshold of bacteria has been established in the colony [3]. Bacteria produce molecules that are released into the environment and by sensing the number of these molecules, they can accurately estimate how many bacterial cells are present.  Once that critical number of bacteria is present, the colony of bacteria begins to glow.
The light organ that houses these bacteria in the anglerfish constantly leaks bacterial cells into the surrounding ocean at a rate of about 107 to 108 cells per hour from colonies of about 1011 cells per milliliter [4]. By leaking these bacterial cells into the surrounding water, the progeny of the anglerfish are able to develop lures with the same bacteria as that of their parents through vertical transmission as well as providing an environmental reservoir [4].
The relationship between bioluminescent bacteria and fishes is not unique. In fact, there are several examples that include deep sea spookfish and rattails employing Photobacterium phosphoreum and, in shallower water, flashlight fish and pony fish utilizing Vibro fischeri or Photobacterium leiognathi [4].  As mentioned earlier, the bacteria that live inside the rod of the female anglerfish are most likely from the genus Vibrio [5]. Bacteria from the genus Vibrio are more closely associated with those that emit bioluminescence in the gut of the fishes, such as in the shallow water pony fish, rather than other deep sea fishes which house their bioluminescent bacteria in specialized compartments [6]. Therefore, this discovery suggests that the mutualism between the anglerfish and these particular bioluminescent bacteria is, evolutionarily, a newly formed relationship.
Cost/Benefit Analysis:
http://fc04.deviantart.net/fs71/f/2010/307/9/8/angler_fish_by_127438-d322z3d.png 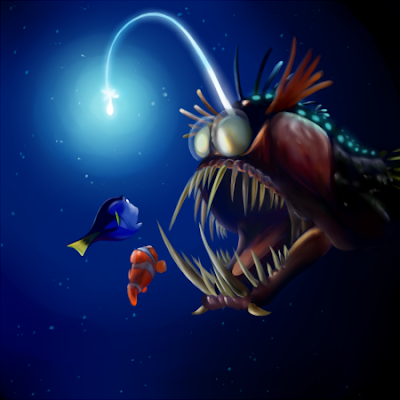 For the anglerfish, participation in such a relationship with its bioluminescent partner seems rather easy. For the minimal resources that it must supply to the colony of bacteria, it significantly increases its chances of capturing prey by mimicking fecal matter—a source of food to bathypelagic organisms which also glows as it falls downward—drifting from the upper layers of the ocean [7].  This does require some maintenance on the part of the anglerfish, however. The anglerfish must: maintain the population of bacteria while removing excess bacteria or dead colonies, ensure that the bacteria stays only in the lure, be able to switch the bioluminescence on and off, and somehow guarantee that the same bacterial colony is passed on to its offspring [4]. All of these housekeeping procedures come with an energetic cost to the organism. Another cost to the anglerfish may be even more obvious: by increasing its own visibility, it also increases the chances that it will be seen, and consumed, by larger predators than itself.
On the other hand, by participating in the mutualisitic relationship, the bacteria are promised a constant supply of nutrients and a relatively constant environment to thrive. However, by remaining inside the lure of a single host over time, evolution limits its ability to form free-living marine colonies and the bacteria are permanently linked to its host organism [4]. There are also energetic constraints involved with producing bioluminescence; however, these are generally small and only about 0.01% of the cells expenditure is utilized by bioluminescence [4]. Lastly, by increasing the anglerfish’s chances of being consumed, it decreases its own reproductive fitness. If the host anglerfish is eaten by an unsuitable host, the bacteria are lost to the gut of the predation. However, if the bacteria are able to survive in the gastrointestinal tract of the predator, the bacteria released with the feces may help the bacteria to move to a new suitable host anglerfish—thus, allowing the cycle to continue.

The above video shows the bacterial bioluminescence of the anglerfish in action as well as gives some other examples of deep sea organisms that utilize similar methods of bioluminescence.