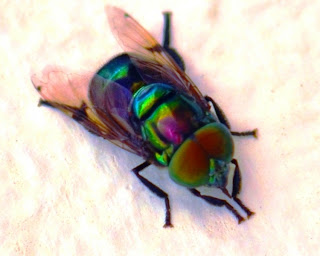 
•Introduction
- Dermatobia hominis is a common forest fly in the regions of Mexico, Central, and South America whose larvae parasitize humans. They are a type of parasite species that needs a warm-blooded host in order to successfully make it through their larval stage. The botfly larvae use the human body (mainly the skin) as a temporary source of food as well as shelter. The morphology of the botfly larvae is almost perfectly adapted for gaining access and retaining settlement in the skin of their hosts. They have also perfected their methods for laying eggs as well as for releasing larvae. This botfly seems to have an almost unstoppable life cycle.


•Symbiont description
- Dermatobia hominis is commonly known as the Human Botfly. It is normally twice the size of the average housefly and often blue in color. Because of its large size, this botfly has trouble when trying to covertly lay its eggs on potential hosts. Therefore, D. hominis has found a way to get their eggs laid without involving themselves directly. They began by becoming more K selective so that they produce a fewer number of offspring. The mother then works to ensure that the offspring she does produce will survive into the next generation [1]. To make sure her eggs are placed on a host, the female botfly uses an intermediate host to transport the eggs for her. This is why the larval stage of this species is so crucial to its life cycle.

•Host description
- The preferred host of D. hominis is the human, but it will also parasitize any warm-blooded mammal. The host must be warm-blooded to provide sufficient nutrients and shelter to the larvae, and it also must have its encounter filter open to the intermediate host that carries the botfly’s eggs [2].

- The life cycle of botfly typically lasts around three to four months. The cycle begins when the adult D. hominis female becomes ready to lay her eggs. She catches another blood-feeding organism mid-flight (usually a fly or mosquito) and then attaches her eggs with a sort of glue to the abdomen of that host. She then releases the vector to go and continue feeding. When this vector lands on a warm-blooded organism, the eggs of the botfly are released in response to the organism’s warm skin. When the eggs detect a spike in temperature, they begin to hatch and dig their way into the skin of the new host. They can enter at either the point where the host was bitten or dig directly into hair follicles [2]. At this point, a sore surrounding the larva begins to form and an opening is created in the skin for the larva to breathe. The presence of this parasite spurs an immune reaction in the host where white blood cells are sent to the infected area and pus is secreted from the opening. However, this is not enough to destroy the baby botfly. The larva is now an oval-shaped critter with rows of backward-pointing spines surrounding its body and hook-like teeth in its mouth [3]. The larva’s ability to burrow deep into the skin and its adaptation of spines surrounding and covering its body prevents it from being pulled out of the skin. Therefore, the host’s normal response of simply grooming is ineffective and is unable to get rid of the larva. Because of this, the larva can continue to develop for another month or two. Once matured, the larva exits the host either at dawn or at dusk to prevent water loss and increase its chances of survival in a terrestrial setting. Then the larva pupates in the soil on the ground and remains in the pupal stage for another month or so. Lastly, the larva hatches into an adult botfly, where the cycle begins again [4].

CLICK HERE OR COPY AND PASTE THIS URL BECAUSE YOU WILL WANT TO SEE THIS VIDEO!  It provides an explanation of the life cycle along with some very helpful images.  (It is "Monsters Inside Me: Invasion of the Botfly" -- Enjoy!

Monsters Inside Me: Invasion of the Botfly
http://animal.discovery.com/videos/monsters-inside-me-the-botfly.html

•Ecology
- If one botfly larva can cause this much damage, there is a bigger problem when there is an infestation of D. hominis larvae. The larvae are able to benefit from many different regions of the body and do not have one preferred niche. They create painful and strange feeling sores all over the body that secrete pus and can sometimes be fatal. The only treatment currently offered is careful removal of the larvae. Doctors can cover the air hole made in the epidermis with a film (something like nail polish) that will start to suffocate the larva and force it to come out for air. However, improper removal techniques can lead to breaking of the larva body, oftentimes resulting in infection where the larva once was. Because the botfly is able to use more common and conspicuous blood-feeders for its own egg dispersal, its larvae has been found to parasitize many different species of warm-blooded mammals as well as humans. An economic issue with this parasite is that it can also infect domesticated animals and oftentimes infects cattle. This can downgrade the quality of products coming from the livestock ultimately hurting this market[5]. 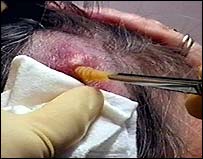 
•An example of a Paratenic host
- Dermatobia hominis provides an example of a paratenic host. One intermediate host in the life cycle of this botfly is a biting vector, such as a mosquito, tick, or fly. These biting vectors, however, play no role in the development of the eggs or larvae of the botfly. They simply serve as shuttles to get the eggs where they need to go. However, their function is crucial to the life cycle of the botfly, and without these paratenic hosts, the botfly would not be able to make to the larval stage [6].


Warning: if you have a weak stomach, you might not want to watch this.  But this video showing the removal of botfly larvae is pretty awesome!