Getting Hooked on Ancylostoma duodenale 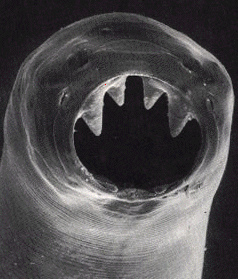 Introduction to A. duodenale:
The hookworm, Ancylostoma duodenale, is a nematode that mainly parasitizes humans. However, it can also be found in a range of paratenic hosts, including dogs, cats, pigs, and even coyotes [1]. A. duodenale infects humans mainly through direct contact, which usually occurs through the foot [2]. However, it can also be transmitted through the consumption of under-cooked meats such as lamb, beef, and pork. The parasites are released back into the soil through human feces. These hookworms are found mainly in the Mediterranean region and Southeast Asia, but they have also been spotted in regions of South America. Individuals infected by A. duodenale can experience bloody diarrhea and anemia. The severity of the infection is determined by the amount present in the individual [1]. As the amount increases, the host will experience more symptoms including excessive blood loss, iron deficiency anemia, and possibly death [3]. Infants are more vulnerable than adults, and infections in children can lead to permanent growth deficiencies [4].

http://www.youtube.com/watch?v=44aq2A6NkUw
Symbiont Description:
A. duodenale is from the phylum Nematoda, the class Secernentea, the order Strongylida, the family Ancylostomidea, and the genus Ancylostoma. These tiny, s-shaped worms only grow to be roughly 8-13 nm in length. Although it is very small, it still contains a very vicious“bite”. Each hookworm contains two very powerful ventral teeth, along with small pairs of teeth located deeper in its capsule to help it bite and attach itself to its victims [1]. Once inside, the parasite will hook itself onto the intestines and continually drain blood from its host, up to 1 mL blood per individual per day [3].
Host Description:
The definitive host, or the host where the parasite reaches sexual maturity, is humans. However, A. duodenale also includes paratenic hosts such as lambs, pigs, dogs, and cats. Although the parasite does have paratenic hosts, it can still be described as a holoxenous parasite since it does not need any other hosts to infect the definitive host. The host specificity of A. duodenale helps it to keep selective pressures on just humans, which increases its chances of surviving and reproducing [1].

Life Cycle:
The life cycle of A. duodenale is relatively simple to follow. First, the eggs are passed through the feces of the human host into the soil where it develops into its first stage, the rhabditiform larvae. Then, the parasite will molt twice in this form before it develops into its infectious stage known as the filariform. In this stage, the parasite will stop growing until it infects a host, either through direct contact or by oral consumption. Once inside the host, the parasite will migrate to the circulatory system until they reach the lungs. From there, they will continue on until they reach their final destination, the small intestines. The hookworms will hook themselves onto the inner wall by biting with their teeth and proceed to start feeding, causing blood loss for the host. From there, the hookworm will mature into adults and reproduce [1]. A single female hookworm can produce roughly 10,000 to 30,000 eggs a day. [3]. The eggs then travel with the host feces, and the cycle starts anew [1].

Ecology:
A. duodenale are usually found in warm, moist, and unsanitary conditions, which are prime conditions for the development of eggs and infection of hosts. The consequences of the interaction in nature is not very significant, as the parasites main target is humans, and the average person that is parasitized by these hookworms will only suffer bloody diarrhea for a short period of time. However, if the hookworms remain untreated, and a tremendous amount starts to build up in a single individual, then there is a chance that it could result in the death of the host due to excessive blood loss [3]. A. duodenale can be treated by taking the drugs Mebendazole, Albendazole, and Levamisole, which will generally kill the majority of the hookworms inside the host. Also, taking dietary supplements is helpful to counteract and compensate for the lost nutrients that the parasites takes during the period of infection [1].

An Example of Host Specificity and Parasite Specialization:
The parasite, A. duodenale, is a great example of host specificity and parasite specialization. In the textbook Parasitism, Combes mentions that by specializing in one species of host, the parasite will gain many advantages such as; reduction of pathogenic effect, increasing and maintaining genetic exchange, limiting intraspecific competition, and forcing the selective pressures onto one species of hosts rather than multiple hosts [5]. Since A. duodenale has only one host, it is able to save its resources and decreases the stress involved in having to worry about how to move from one host species to another.
References
[1] Fetouh, N. "Ancylostoma duodenale." University of Michigan Museum of Zoology Animal Diversity Web. 2003. http://animaldiversity.ummz.umich.edu/site/accounts/information/Ancylostoma_duodenale.html