Moray Eels and their Maids 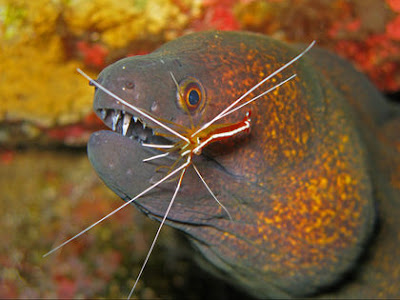 Introduction
There are over 80 different species of moray eel, including the common “Giant moray”, Gymnothorax javanicus, the “Zebra moray”, Gymnomuraena zebra, and the “Snowflake moray”, Echidna nebulosa. All of these creatures are classified as fish and can typically be found in reefs of tropical and subtropical waters.  They prefer to live in brackish water and use rocks and coral as forms of concealment from both predators and their prey. As carnivores, morays prefer to feed on other fish or cephalopods and usually hunt for such prey at night. [2] Because their eyesight is incredibly poor, eels are known to have an incredibly keen sense of smell that helps them to identify potential food sources, which they then attack using their incredibly powerful jaws. [1]

Also found in tropical and subtropical waters are cleaner shrimp, especially the "Pacific Cleaner Shrimp", Lysmata amboinesis.  These tiny creatures grow to be up to 6cm long and are omnivores that prefer to eat parasites and dead tissue, especially off of other animals. Because of their incredibly social nature, these shrimp congregate with other cleaner animals and wait for large fish to request their cleaning services.[5] 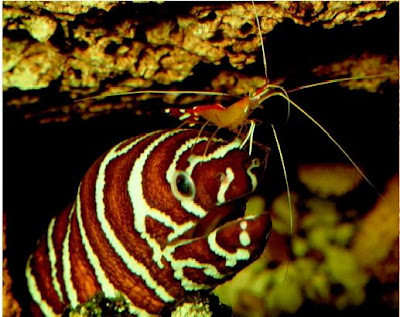 Description of the Relationship
Surprisingly, despite a diet high in crustaceans, eels tend to shy away from eating certain shrimp, and particularly cleaner shrimp. While these shrimp would be an excellent source of food to a moray, they are completely neglected and actually invited to swim inside the fish’s mouth without risk. Morays seem to not only realize that the shrimp remove parasites from their bodies, but can also tell if they are doing a thorough job.[3]
Cleaner shrimp actually do complex dances in the coral reef to demonstrate that they are available to clean, and despite their strong predatory behavior, eels become incredibly docile and allow the shrimp to begin their work. [4] Moray eels can often be observed with one or several of these cleaner shrimp that comb over their bodies, mouth, and even in between their teeth searching for parasites. The shrimp even swim inside the gills of the eel in search of ectoparasites.
The parasites provide the shrimp with nutrition, while the eels are happy to be cleaned and freed of these harmful parasites. Interestingly, eels are covered in a layer of mucus which is actually much more appetizing to the shrimp, yet they have learned to avoid the mucus and strictly eat the parasites. This is because if a moray eel senses that a shrimp or other cleaner organism is eating more mucus than parasites, it violently jolts, sending a signal to both the cleaner and any other creatures around that this particular cleaner is not doing his job properly. [2]

Cost/Benefit Analysis
This mutualistic relationship is very successful because the benefits far outweigh the costs. While an eel could typically eat, and find nutrition in shrimp, losing the nutritional value of one single shrimp in order to have all of the parasites removed from its body is a worthy price to pay. Living with fewer parasites, and therefore being healthier overall, allows the eel to hunt more productively in the long run, ensuring more food and a longer life.
From the point of the view of the shrimp, this is an incredibly beneficial relationship because it is provided with an exceptionally easy method of finding food, while also ensuring that it does not become food for the eel. This relationship is extremely common due to its positive impact on both individuals involved.