Foraminifera and Algae- Be my chef

Introduction
Foraminifera is a class of amoeboid protists that are distinguished by their psuedopodia and their tests (shells).  They are found all over the world in estuaries and marine habitats. Forams can be classified as benthic or planktonic based on whether they are found floating on the water’s surface or on the ocean floor. The tests of forams often accumulate on the ocean floor and in coral reefs.[6] Many have been found to date back to the Cambrian period.  The tests of foraminifera contribute to major landmarks such as the Pink Sands of Bermuda, the White Cliffs of Dover, and the stones that make up the Great Pyramids of Egypt. [1,7] 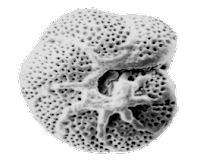 The tests of Foraminifera are often used by paleontologists to determine past environments, relative ages of marine rocks, water chemistry, and to find petroleum.  In fact, oil industries have started hiring paleontologists who specialize in foraminifera to help direct drilling and increase well productivity. [4]
Many Foraminifera are kleptoplastic in that they have an endosymbiotic relationship with algae. These algae may include green algae, red algae, golden algae, diatoms, and dinoflagellates. The forams sequester the algae for nutrition and the forams provide a home for the algae.  Nitzschia frustulum symbiotica is found in about thirty percent of the associations, and is the most common of the diatom symbionts.[2]
The life cycle of foraminifera varies. The smaller species reproduce only asexually through budding or multiple fission. The larger forams alternate between sexual and asexual phases, between haploid and diploid generations.[6] 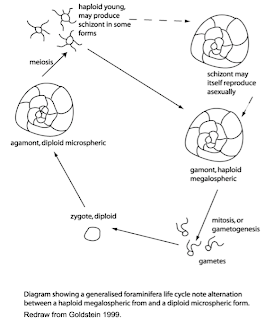 The Relationship
There are two main factors that predispose Foraminifer for symbiosis. The first factor is the compartmentalization of their tests. Foraminifera test structure can vary in chamber arrangement and in the type of apertures they contain.[6]  The chambers of the tests can be subdivided allowing compartmentalization of different cellular activities. This poses as a benefit for the forams because it separates digestion from its symbionts. The second factor that contributes to their ability for symbiosis, is that they reproduce via asexual reproduction. Asexual reproduction insures vertical transmission of symbionts.[3] 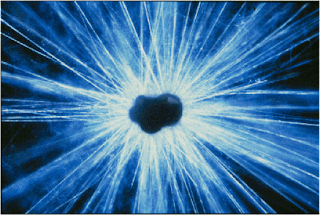 The initial recognition between foraminifera and the potential symbiont is mediated by a cell signaling system involving a specific surface antigen, the common symbiont surface antigen (CSSA). Receptors for CSSA are abundant on the pseudopodia of Forams and make the initial contact with the algae/diatoms. [4] After contact, the diatom is phagocytosed and brought into the interior of the foram’s test, away form the active digestive process.
Because they contain more than on chamber, one host is capable of harboring more than one species of diatoms at a time. The figure below details which algae species grows within certain foraminifera life forms. 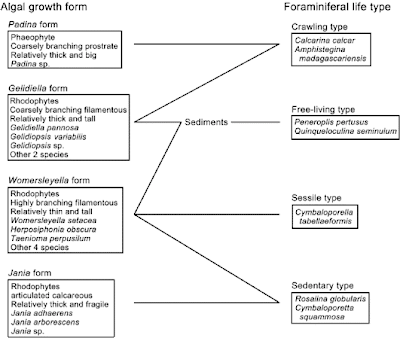 Once the algae are sequestered, the foraminifera use the algae’s ability to photosynthesize to their benefit and acquire the nutrients produced by the algae. During the day, the algae migrate onto the pseudopodia to expose themselves to more sunlight so they are capable of photosynthesis. Then at night, are drawn back into the foraminifera so that the nutrients may be sequestered. In return, the foraminifera provide algae with a home and a place to “farm”.
There is a hypothesis that suggests that symbiosis may have contributed to the evolution of certain groups of foraminifera tests. There is supporting evidence in fossil records that make researchers believe that the relationship between foraminifer and algae is a long and continuing one. The greenhouse nature of the transparent tests, the canals, and the pores in the test of many larger foraminifera are all thought to be adaptations to symbiosis.
Cost/Benefit Analysis
The ultimate benefit of the relationship between Foraminifera and algae are quite simple, the algae provide the food and the forams provide the shelter. An additional, less studied, benefit of this relationship pertains to calcification of foram tests. Calcification of the test is enhanced in the light. Symbiont-bearing forams migrate toward or away form the light sources if conditions permit them.[2] By moving in the light the forams benefit by increased calcification and increased photosynthesis by the algae. 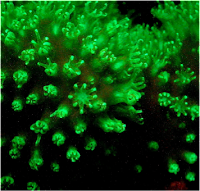 Some costs that may arise from this relationship include nutrient and habitat limitations for the algae and selectivity for the foraminifera. There are limitations on algae habitat because the algae can only grow within the foram, which may cause there to be limited space. Also, the algae must adjust to the habitat in which that foram is living.  Things such as light ad nutrients sources may not be as abundant as the algae may need. For example, the population density of zooxanthellae on coral, and the foraminifera that inhabit the coral,
is controlled by systematic nitrogen limitations within the host. If there is not enough nitrogen to keep the algae “happy” the zooxanthellae may outgrow their host and the host loses control over the symbiotic algae. [2]
The foraminifera must be selective in the algae species that it allows to grow in its test.  A number of species of forams cannot grow if they are starved, even when they are incubated in the light. The algal photosynthesis alone does not satisfy their needs. Therefore, there is a cost for the foraminifera and the algae due to selectivity. Foraminifera can only choose algae that will meet their nutrient needs, and algae can only live in foraminifera that will allow them to live there.

http://youtu.be/9Lm9hUj2h_0
( a good example of how Foraminifera "bring in" their symbiont using their pseudopodia)