A Free Ride Under the Sea: Barnacles and Baleen Whales

Introduction:
The barnacles and whales share a commensal relationship. Charles Darwin. Ring a bell? He was known to be a major contributor to the research of the lives of these barnacles (Cirripedia). In the earlier years, the Cirripedia was classified in the same category as crustaceans because of their outer shell. However, a major difference that was found that put the Cirripedia in a different category was its hermaphroditism characteristic (1). They are known to be invertebrates, meaning a host is essential to travel. The barnacles attach themselves to the whales as the whales make their way across the sea for nutrients and new habitats. These hermaphrodites consist of six free-swimming plankton naupliar stages (4). Even though the barnacle eggs can self fertilize, it is more likely for another barnacle to fertilize it.  However, it is as adults when they are able to attach to the hosts for an adventure around the sea (2).
Attachment:
In the life cycle of the barnacle, the last larval stage is known as the cyprid stage. This is the stage before it goes into its adult stage. As adults, the barnacles have “six pairs of feathery thoracic limbs” (4), which helps them grab their food and nutrients while being attached to the whales and traveling under the sea. They produce a "sticky cement" which helps the barnacle stay on the whale without falling off, under the ocean. At first, they attach anywhere on the whale, but then they find their way around particularly near the nostrils or fin, where water is easily accessible (3).

Relationship:
The barnacles (Cirripedia) and the baleen whales (Mysticeti) share a commensal relationship. This relationship is not particularly unique to only barnacles and whales. The barnacles can have many other hosts such as sea turtles and other marine animals.  However, there are two main important reasons why the barnacles and whales share this commensal relationship. Their main motive is to be able to find nutrients as they travel across the sea with their host, particularly, the whale. These barnacles are known to be suspension feeders. The outer shell of the barnacle consists of certain "plates" that helps them draw water into their shell (2). Another reason barnacles attach themselves to the host is to migrate to different locations. Once they attach to a host in their adult stage, they remain there for three to five years (2).  Even though the barnacles are attached to the host throughout their life span, they are being migrated to different habitats without the use of their own energy.This is an example of phoersy that Claudes mentions in his text (5). 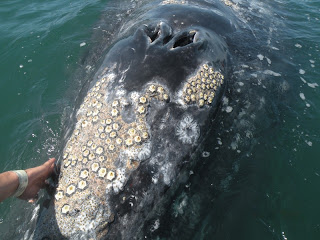 [6]
Cost/Benefit:
In this commensal relationship, the whale is not highly affected. According to the whale, the barnacles are simply unnoticed. However, a slight noticeable cost for the host is the annoyance and itchiness that is caused by the barnacles (4). A major benefit for both these creatures is that they both are filter feeders. While the tooth-less baleen whales feed mostly on plankton, the barnacles pretty much eat whatever comes their way, also consuming plankton (2). The benefits outweigh the costs for the barnacles. A benefit for the barnacle is that it gets its food as it travels on the host. It does not have to go looking for its nutrients, as many others do. It pretty much grabs what it can as it rides on its' host.  The barnacle does not have to expend its own energy to get its nutrients. Another advantage for the barnacle is its ability to find different habitats under the ocean.  According to Claudes, "two clear advantages to having a living habitat is having a stability of the enviornment and protection aganist predators" (5).  Even though, attachment is crucial for the life of the barnacle, energy is preserved as it relaxes and travels along with the host. It's like a free ride across the sea!

[5] Combes, Claude. Parasitism: The Ecology and Evolution of Intimate Interactions; Translated by Isaure De Buron and Vincent A. Connors; with a New Foreward by Daniel Simberloff.
Chicago: University of Chicago, 2001. Print.