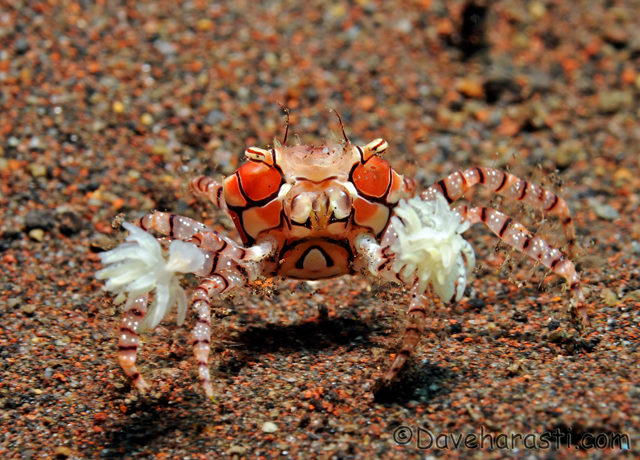 INTRODUCTION:
Lybia tesselata, commonly known as boxer or pom-pom crab, is a tiny, bright colored crab with striped legs and bold markings on its carapace [1]. They are best known for their behavior of using their pincers to hold sea anemones, which look like pom poms. These species are usually found in coral reefs anywhere in warm waters of the Indo-Pacific range and need rocky caves and crevices for hiding [2]. New species only emerge at night or in dim light when they feel secure. Boxer crabs are omnivores, they feed on detritus and small food particles that they pick off the substrate or that adhere to its anemone partner [1]. Sea anemones are marine organisms that belong to class Anthozoa. They are named after a wild terrestrial flower, anemone. A sea anemone is a polyp attached at the bottom of the surface and their body is topped by a ring of tentacles which are often colored. Most species thrust themselves into sand, live in furrows or attach themselves to other free-swimming organisms [3]. 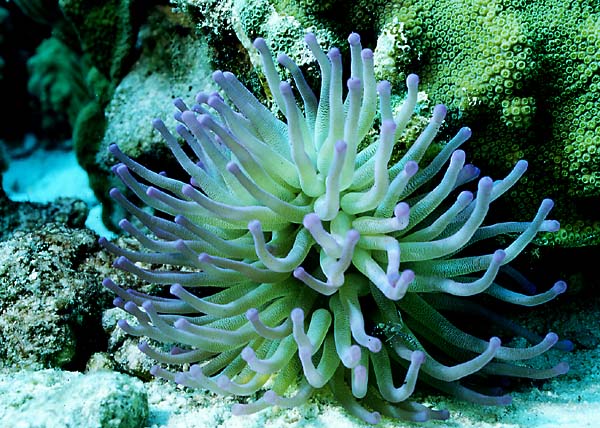 Boxer crabs and sea anemones have a mutualistic relationship in which the boxer crab carries a pair of anemones in its claws. These claws are small and delicate enough to only hold the anemones[5]. Both the organisms benefit from the relationship, providing each other with protection from predators and food. When approached by a predator, boxer crab waves the anemones in its claws at them as if it is boxing. The tiny anemones have strong stinging abilities and are so powerful that most predators back away [4]. The crab gets protection while the sea anemone obtains food particles that are dropped by the crab. Boxer crabs do not even put the anemones down to eat and typically sweep the anemones across the surface collecting food particles and debris in the anemones. The species later use their mouth to collect the food out of the anemone's tentacles. The remaining food particles that are not fetched by the crab are for the anemones to eat. During molting, the crabs place the anemones in a safe place, shed their exoskeleton and immediately pick the anemones while hiding in a safe place until a new protective exoskeleton grows [5].

COST/BENEFIT ANALYSIS:
Since the crab-anemone have a mutualistic relationship both of the organisms benefit from each other. As stated above, the sea anemone's tentacles provide the crab with protection from its predators. In return, the crab supplies the anemone with a constant food supply and helps the sea anemone catch more food by moving it from place to place. Moreover, the anemones are also used by the crabs to collect food particles and debris [4]. There are no costs for the sea anemone from taking part in this relationship. However, it is possible for the crab to accidentally sting itself resulting in the tentacles to eject a poisonous stinging threads that could paralyze the crab[6].