Introduction:
In high school there's always one couple that seems so perfectly matched, like the typical star quarterback and head cheerleader relationship. He carries her heavy books to class and she brings him ice cold water to practice. These types of people win prom king and queen in every cliche movie and will inevitably live happily ever after. The natural world also has its own superlative categories. Alvinella pompejana, commonly referred to as the Pompeii worm, is an extremophile polychaete that resides in the East Pacific Rise hydrothermal vents deep in the Pacific Ocean [1]. In this environment, temperatures can be as hot as 176º F and the five inch worm is still able to survive [2]. It is the most heat tolerant animal and can have a broad temperature gradient along its body. Tentacle-like gills adorn the A. pompejana's head as if to crown itself with the title "hottest creature on earth." Despite the Pompeii worm's adaptations to extreme environments, thermal vents are unstable habitats so the worms are probably inclined towards methods of dispersal with large numbers of offspring. However, like most deep sea vent creatures, the full life cycle of the Pompeii worm remains unknown [3]. Pompeii worms insert their tails into the side of the vents, leaving their head exposed to the milder waters of 72°F [5]. How is the worm able to tolerate such a range of temperatures? The secret lies in a fuzzy hairs along the Pompeii worm's body. The "fleece" is actually bacteria. 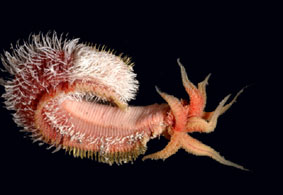 [6]
Colonies of filamentous Proteobacteria form a protective coating over the worm's mucus glands [7]. It's not quite a letterman's jacket that the previously mentioned football star would give his cheerleader girlfriend. In fact, it's a more profound mutualistic relationship.


Description of Relationship:
The bacteria and A. pompejana are protected from the extreme heat by enzymes in the epibacteria. Some research indicates that the bacteria serves as thermal insulation [1]. In return, the Pompeii worm secretes a mucus that the bacteria lives and feeds upon [3]. This relationship has evolved to a level of morphological functionality. The bacteria and the mucosal secretions are part of the worm and contribute to protecting it from the vent temperatures [3]. Metabolic processes for the worm may also depend on the bacteria because of the extreme conditions in their habitat. The bacteria can transform inorganic substances into usable sources of energy, and thus helping the worm survive nutritionally as well.

Cost/Benefit Analysis:
Both organisms benefit from the other, the worm gains protection and sources of energy, while the bacteria gains a place to live and sustenance (Pompeii worm mucus). The worm encourages bacteria attachment by secreting the mucus, so the costs of housing the worm are outweighed by benefits. Diversity of life in the hydrothermal vents is very small, due to the lack of organismal adaptations to such conditions. Extremophile bacteria's reliance on the Pompeii worm is purely beneficial.