Bacteria in the guts are good for you? 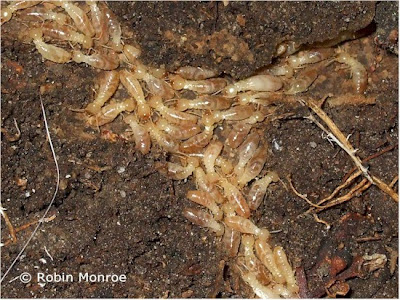 Termites have roamed the earth since the time of the dinosaur yet most species have not yet developed a way to digest cellulose on their own [1]. Millions of years ago, termites learned that a bacterium in their gut could help them break down the cellulose and plant fibers that they eat [2]. Since then termites and Trichonympha have lived in a symbiotic relationship with one another. Most ever species of termites share

a relationship with the bacterium Trichonmympha and because termites are found worldwide, and mostly in tropical areas, so is their bacterium [3].

The life cycle of a termite is depended on two things: the species and the environment. Some species live longer than others and some environments support termite life better than others. Warmer climates allow termites to live a longer life [4]. A queen termite in some species can live for a decade or more while a worker or solider termite has a life span of one to five years. A termite goes through three stages of development. Eggs hatch to reveal nymphs from there two different types of termites develop: the worker

termite and the solider termite. Both types continue to molt and form into the adult termite. Due to termites having incomplete metamorphosis, both worker and solider termites grow wings. This stage with wings is called the alates stage. The termites continue to grow and they shed their wings. From there a king and a queen termite mate and the female lays more eggs to continue the cycle [5].

Termite nymphs are not born with the bacterium Trichonympha but rather they must be infected with it from one of the older termites. Every time a termite molts it must infected again in order the termite to survive [6].

Trichonympha inside the gut of the termite helps the termite digest cellulose and plant fibers that the termite could not digest on its own. This adaptation has allowed termites to survive for millions of years while allowing the bacterium to continue developing. The bacterium inside the termite engulfs the eaten wood or plant substances and uses a bacterium of its own to break it down. 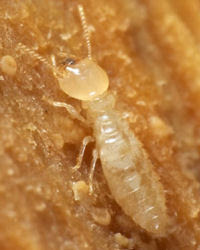