The Emperor and its Dancer 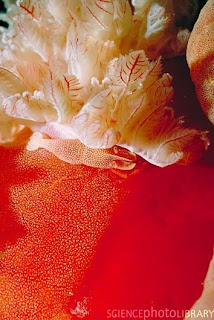 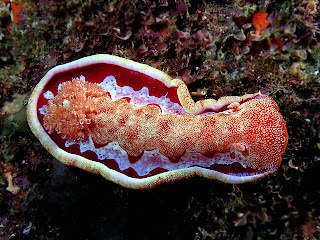 Hexabranchus sanguineus, more commonly known as the Spanish dancer, is a carnivorous slug found mostly in the waters surrounding Hawaii. It is called a Spanish dancer because of how its bright colors and movement through the water resembles a Flamenco dancer [1]. Some species of the slug are toxic, obtaining their toxicity by ingesting other toxic organisms, like the Portuguese man-of-war and many are most active at night [2]. In the daytime, they are pink with white patches, and at night, they are pinkish red and blotchy. Its mutualistic partner, Periclimenes imperator, is an emperor shrimp found in all areas of the Pacific Ocean, from Hawaii to Indonesia [4]. These organisms look like mini-lobsters with a duck-bill like head [5]. They also have the pink-red with white spots coloration, similar to that of the Spanish dancer and other organisms it inhabits. 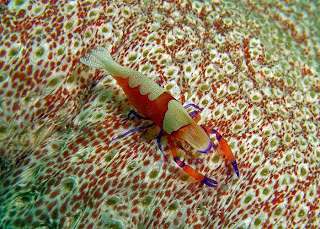 Description of Relationship
The relationship between Hexabranchus sanguineus and Periclimenes imperator has long been established as mutualistic [1]. Although both can survive without the other, there are advantages to a shared interaction. The relationship is established simply through encounter. If these organisms meet, and both do not mind creating a relationship with the other, then interaction is formed. The shrimp can be found within the gills of the slug [2] and cleaning off any kind of growth and even parasites. Usually the shrimp is not alone, cleaning and travelling with a partner. The slugs receive a thorough cleaning while the shrimp receive a great food supply. A unique characteristic of this relationship is that once it is established, it usually remains for the life of the organisms [3]. 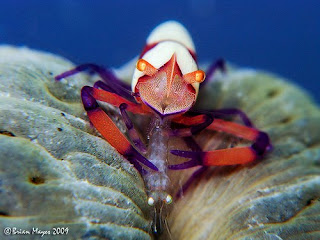 Cost/Benefit Analysis
The benefits have been discussed above; however, there are some possible risks to each organism as well. Sometimes, when predators of the shrimp try to attack, the slug gets damaged or killed in the process. This emphasizes the importance of the shrimp’s ability to blend in with the slug [5]. Also, because the slug has to carry around the shrimp, extra energy has to be expended. The costs for the shrimp are minimal as well. There could be a chance that the slug accidentally eats the shrimp or if the shrimp accidentally ingests part of a toxic slug. This, however, probably does not occur frequently since the shrimp stay by the gills of the slug.