Introduction: A parasite whose "hand" seems to be in the pots of many is Wolbachia bacteria. Wolbachia is perhaps one of the most successful parasites [1]. Not only can it affect a wide array of hosts, but it does so effectively. This suggests that the parasite is highly compatible with its host. The Wolbachia is a genus, not a species. There are many different species of Wolbachia that correspond to different hosts although most of the species are closely related [2]. This post will focus on some of Wolbachia's most outstanding and noteworthy hosts. These hosts include but are not limited to Drosophila melanogaster, Asobara tabida, and Trichogramma wasps. Drosophila, more commonly known as the fruit fly, can be found near unripe or rotten fruit. The two latter hosts, both parasitic wasps, can be found in ferilte, infertile, or dead eggs of various host insect species. Wolbachia can be found all over the world. The bacteria affect a grand total of sixty percent of the arthropod population alone. Wolbachia are also capable of infecting spiders and filiarial nematodes. The fruit fly has a total lifespan of only thirty days at optimal temperatures. Trichogramma wasps live for about eight to ten days while A. tabida, can live for an average of fifteen days. Ecologically speaking, the importance of Wolbachia in regards to the hosts are simple: by understanding a highly prevalent parasite and its genetic effects upon hosts, it can hopefully be manipulated to serve ulterior purposes. Also, the prospect of horizontal transmission makes Wolbachia that much more evolutionarily fascinating in the eyes of science because it can cross a barrier that typically impedes transmission [2]. The main targets of Wolbachia research are Dengue fever and the ever-popular Malaria (both of which are vector-borne) [3]. It is hoped that by understanding the Wolbachia genome and its host interactions, the transmission of the disease can be stopped via Wolbachia infection. The main focus of Wolbachia research have been the aforementioned hosts; the idea of using Wolbachia to control or wipe out vector-borne diseases is relatively still in its infancy. However, I feel its necessary to understand the concept behind this new idea that is growing in its popularity.

Description of the Relationship:
In Drosophila, the Wolbachia relationship began as a parasitic one. As it causes in its other hosts, Wolbachia resulted in male feminization, sterility, cytoplasmic incompatibility, and parthenogenesis [1]. The specific foe turned friend is the Wolbachia pipentis. The parasite, known for it's sterilizing effects, actually reverses sterility in mutant females, increases female lifespan, and fecundity of the host [4, 5, 6, 7]. The means by which this relationship transformed is unknown. This relationship is mutualistic and highly common. The Wolbachia bacteria found in the reproductive systems of its hosts, are obligate symbionts. The entire genome of Wolbachia can sometimes be found in the genes of its hosts [8, 9]. The bacteria completely infects the ovaries of a fruit fly (left) in comparison to an uninfected ovary (right) [10].

[10]
In the both parasitic wasps, Asobara tabida and Trichogramma, both the host and its parasite have become obligate mutualists [11, 12]. In the case of A. tabida, the bacteria are necessary for the maturation of the female's oocytes [12]. For Trichogramma wasps, the bacteria are necessary for reproduction in an entirely different way. One of its parasitic effects, parthenogenesis, has become the main means of reproduction. There are extreme disparities in the male to female ratio (negligible amount of males) [11]. The Trichogramma wasp and A. tabida can be seen below [13, 14]. 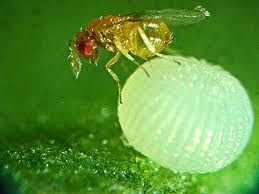 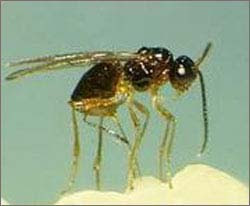 [14]
Cost/Benefit Analysis:
In each of the three relationships, Wolbachia is an obligate symbiont in a mutualistic relationship. The Wolbachia not only receives a habitat from its host but it also does not have to worry about the transmission of its genes. It's highly successful because it takes refuge in the reproductive systems of its hosts, is transmitted maternally (this explains the emphasis on female over male hosts) via egg cytoplasm [1, 2, 4, 5, 6, 7, 8, 9, 15]. The bacteria is a significant player in the A.tabida wasp and Drosophila; it is the opinion of the writer that the bacteria is highly evolved because A. tabida wasps parasitize the fruit fly. Not only does Wolbachia inhabit the host of the parasitic wasp, but of the parasite itself. The mutant female Drosophila owe any resulting progeny to the bacteria [6, 7]. Though the progeny will be infected, the Drosophila's fitness is increased from nil to existant. For non-mutant Drosophila, the bacteria still increase fitness [4]. As outlined in Combes' text, one of the motors of success is high fecundity [16]. With a greater number of progeny, there is a greater probability of gene transmission. Though Combes was discussing parasites, this host reaps this fitness-increasing trait from its host. In A. tabida, the bacteria, once again, rejuvenates the fitness of the female host. Upon being cured of the "infection" (Wolbachia), the female A. tabida's oocytes cannot mature (resulting in non-fertilization) [4, 11]. Her genes cannot be transmitted without the bacterial infection. In Trichogramma wasps, the bacteria is able to be transmitted intra- and interspecifically. This causes the male to female ratio to become extremely disproportional. The benefits of parthenogenesis are that it is simpler and less taxing than sexual reproduction. Less energy has to be devoted to the many facets of sexual selection (mate selection, sexually trandsmitted diseases/parasites, and less competition). However, the cost of the benefit (parthenogenesis) is a lack of genetic recombination that could increase genetic diversity. Also, sexual reproduction helps prevent harmful mutations via recombination. Both of these disadvantages (lack of sexual reproduction)are results of the sex ratio produced by parthenogenesis [11]. Wolbachia research could hopefully one day lead to the dissolution of certain parasitic infections. The aforementioned research on host relationships are the means to someday reaching that end.
References:
[1] http://news.nationalgeographic.com/news/2010/01/100126-sex-puppeteers-wasps-parasites-virgin-birth-sex-changes/
[2] http://mbe.oxfordjournals.org/content/16/12/1711.short
[3] http://www.youtube.com/watch?v=jiSOeOCe-zM
[4] http://www.brown.edu/Departments/EEB/rand/Fry.etal.04.pdf
[5] http://hydrodictyon.eeb.uconn.edu/people/fry/Evol2.pdf
[6] Combes, Claude. The Art of Being a Parasite. Chicago: The University of Chicago, 2005. 73-74.
[7] Starr, D., and T.W. Cline. 2002. A host-parasite interaction rescues Drosophila oogenesis defects. Nature. 418:76-79.
[8] http://www.ncbi.nlm.nih.gov/pmc/articles/PMC368164/?tool=pubmed
[9] http://www.rochester.edu/news/show.php?id=2963
[10] http://www.wired.com/wiredscience/2007/08/the-great-bacte/
[11] http://edepot.wur.nl/121410
[12] http://www.ncbi.nlm.nih.gov/pmc/articles/PMC1765438/
[13] http://www.lucasbrouwers.nl/blog/2010/08/bacteria-force-wasps-to-leave-sex-behind/
[14] http://www.innovations-report.de/html/berichte/biowissenschaften_chemie/bericht-42700.html
[15] http://gbe.oxfordjournals.org/content/3/209.abstract wol genome diversity?