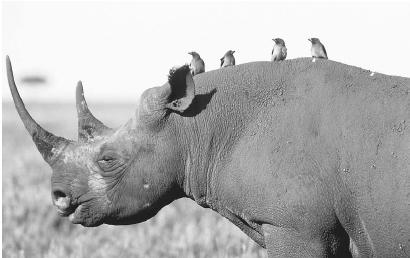 [4]
Description of Relationship:
The Buphagus africanus or Buphagus erythrorhynchus help the Diceros bicornis by eating ticks and other parasites off the body of the rhino. This helps keep the rhino clean while feeding the bird. This shows a mutualistic relationship. Not only does the rhino receive pest control, it also receives a warning system. When the rhino is in danger the oxpecker will take off or start making loud chirping noises which alert the rhino [5]. The oxpecker's role has resulted in the given Swahili name of "askari wa kifaru"; this translates in English to "the rhino's guard" [6]. The oxpeckers do not feed exclusively on rhinos, but they do feed exclusively on the backs of large mammals such as zebras, wildebeests, buffalos, and even giraffes.
Cost/Benefit Analysis:
Buphagus africanus or Buphagus erythrorhynchus
Costs:
none
Benefits:
Feeding place
Reproduction
Diceros bicornis
Costs:
Injury- It is believed that the oxpecker keeps wounds open by eat the blood and tissue surrounding the wound. This hurts the rhinoceros and prolongs the healing time [6].
Benefits:
Pest control
Video: