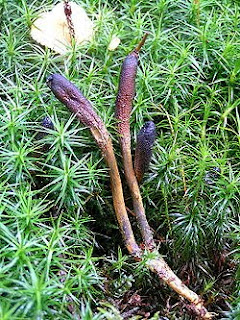 
The relationship between Cordyceps and its hosts is strictly parasitic since the Cordyceps end up killing their host. The host ranges from ants to moths to walking sticks. Cordyceps are endoparasitoids meaning they attack inside their hosts; ending up taking over the host brain and body[1]. This fungus spreads its seeds just like any other plant; however once the pollen infects its host is when it acts differently. The cordyceps, still unknown, but somehow travels through the host body until reaching the brain where it infects and takes over them. Infected ants are known to outcast infected ants and even taken as far away from the colony once known infected. The reason for this is the outcome of these infected hosts. They disorientate their host and forces them to attach to nearby limbs. There the fungus does its work by sprouting the fungus sprout out of the head where they later end with a cluster of capsules. When finished, the capsules burst to release more spores into the air to try to infect other host passing by. 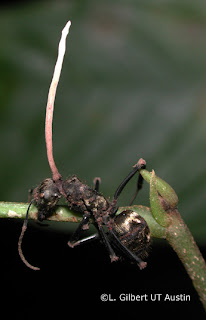 The hosts of the Cordyceps ranges from different arthropods such as the Odonata, Blattaria, Hemiptera, Coleopter, Phasmida, Hymenoptera, and Lepidoptera, each depending on the species of the Cordyceps [2]. Even though the Cordyceps affects so many different insects, they are not considered harmful; they are more of nature’s pesticide for insects which get too numerous

Recently Cordyceps are used in Chinese medicine to help fatigue resistance, improve stress tolerance, enhance immune function and improve general health[3]. The specific species the Chinese use is the cordyceps sinensis species which is also known as the Chinese caterpillar.

The Cordyceps are very similar to species we learned in class such as the Dicrocoelium which infects the ant host into controlling the mind. They then force the ant to crawl up stalks and intentionally get eaten by the next host, live stalk. However instead of forcing the ant to crawl and get eaten, Cordyceps kill the ant and release spores from the body of the host.