Remora: Not Quite a Drag

Remora are a group of fish that are members of the family Echineidae; there are eight known species, all belonging to one of four genera: Echineis, Phtheirichthys, Remora, and Remorina [4]. They are usually found in warm, southerly waters. Remora interact with a wide range of marine animals. They are known to attach themselves to fish (particularly sharks and rays) and whales, along with other large marine animals – and even the occasional snorkeler or scuba diver [2]. Remora possess a modified dorsal fin that runs from just above the snout of the fish to the nape of its neck. This fin has several transverse plates; it is used by the remora to attach itself to its host. Some remora cling to the host’s torso, but others are found on or near the host’s gills. The name “remora” is the Latin word for “delay”; they were believed to slow down ships and animals that they clung to because of the weight they add and the drag they produce. 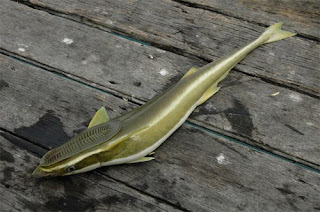 Description of the Relationship:

Unfortunately, very little is known about the origin of remora and the evolution of their unique trait and behavior. While other fish – such as the “cleaner fish” studied earlier in the semester – exist in a relationship that superficially resembles the one between a remora and its host, no other identical examples are known. 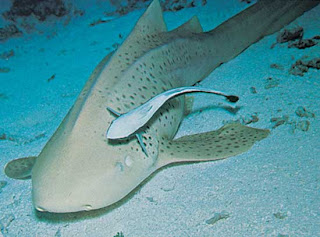 Whether the relationship is commensal or mutualistic, in nature there is little or no harm to the host. In commensal cases, it has an unexpected passenger that does not seek to harm it and that will, at worst, either slow it down by increasing drag on the host as it swims or perhaps cause some minor gill irritation. In mutualistic cases, the host benefits as the remora cleans its host of dead skin, bacteria, and ectoparasites.

Similarly, the remora always benefits from this relationship in a natural environment. Whether the relationship is commensal or mutualistic it gains food, shelter, and protection. Since the remora can detach itself from its host, and is capable of swimming freely, its well-being is not linked to that of the host [2]. Some scientists hypothesize that remora run the risk of being eaten by their hosts, but to date no evidence has been found supporting this idea.

This relationship has incurred some harm for both the remora and their hosts in cases where they live in a human-populated environment due to an unusual fishing practice of some aboriginal tribes. In some regions where remora are prevalent, fisherman use a live remora tied with a long cord in lieu of a fishing hook and rod – they wait until a game fish is spotted, release the remora, allow it to attach itself to the game fish, and then haul both back in with the rope. In some regions the un fortunate remora is eaten along with the game fish, but in other areas they are honored for their contribution to the tribe’s well-being [2]. Despite the man-made disadvantage, the relationship persists because it provides remora with ready food and the high-speed motion they need to keep their gills functioning [2]. 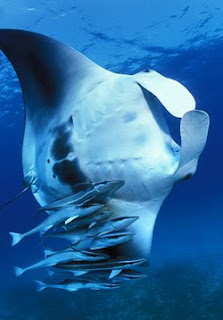