Relaxing in the Rectum 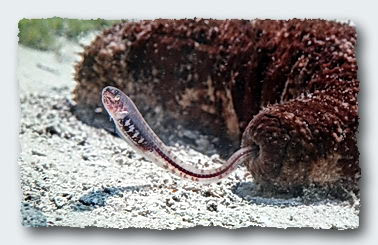 Introduction:
﻿﻿﻿﻿﻿﻿﻿﻿﻿﻿﻿﻿﻿﻿﻿﻿﻿﻿﻿﻿﻿﻿﻿ Many organisms living in the sea benefit from a symbiotic relationship with other organisms around them. One example of this is the relationship between the sea cucumber and the pearl fish. Sea cucumbers are echinoderms that have a shape very similar to soft cucumbers (1). They have “leathery skin” and their body is essentially one long digestive tube. These invertebrates crawl along the floor of the ocean and can reside in both shallow and deep areas of the ocean. They are omnivorous and usually eat small particles and detritus they find on the ocean floor. The sea cucumber can grow between 2 to 200 cm and can live to be between 5 and ten years old (2). Spawning for the sea cucumber usually occurs between June and August. The sea cucumbers release their sperm and eggs in the water and allow fertilization to take place. These fertilized eggs continue to develop into larvae, which become suspended in the water column for up to 70 days. Eventually, these planktonic forms settle on the ocean floor, where they change into tiny little juvenile sea cucumbers. Growth is slow for these invertebrates, and it can take up to 4 years for the cucumber to reach adult size (3).  ﻿﻿﻿

The symbiont of the sea cucumber is the pearl fish. Pearl fish are “eel-shaped” fish that are found worldwide, but primarily in tropical, shallow areas around coral reefs. They have long, slender bodies that lack scales and they usually have transparent skin. The tail of the pearl fish is long and pointed, and the anus of this fish is located close to its neck. Pearl fish typically grow to be about 15 cm long (4). The female pearl fish releases clumps of eggs late in the summer to begin the life cycle. These eggs rise to the surface and hatch, turning into a specific type of larvae called vexillifers. These larvae live among the plankton until reaching a length of about 7 to 8 cm. At this point, the larvae develop into tenuis. These forms descend to the ocean floor and begin their search for food and a host (5). The pearl fish will constantly be on the lookout for sea cucumbers to create a symbiotic relationship.