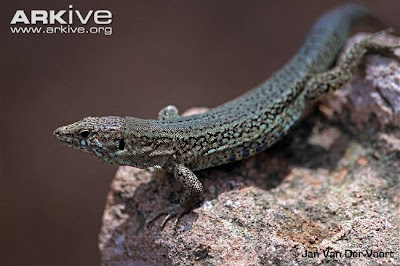 The lizard, Podarcis lilfordi, is found on the Balearic Islands off the coast of Spain [1]. However, unlike other lizards, this species shares a mutualistic relationship with the shrub Daphne rodriquezii [2]. D. rodriquezii is characterized from its beautiful white flowers and it also contains many fruits that the lizards like to consume [3]. The lizards consume and disperse the seeds of the plant by eating the fruits that grow from the shrubs [4].

P. lilfordi is a medium sized lizard that grows to a maximum of 80mm. Its body mass can be anywhere between 4.2 to 9.5 grams. The females reproduce cyclically, producing 2-4 eggs per clutch. They can lay multiple clutches in one season [3]. However, as new predators and lizards show up to the islands and compete for resources, the population of P. lilfordi has slowly started to decline [1]. The shrub, D. rodriguezii, starts to grow during the early spring season. They contain very small, white flowers. The sepals and petals unite, forming a tube called the hypanthium that usually has purple dyes and is 7 to 11 mm in length. During the summer, the shrubs mature and produce red-orange, fleshy globose fruits. The shrubs rarely grows above 50 centimeters in height [2]. 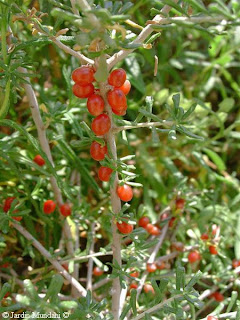 Description of the Relationship:
P. lilfordi are very productive seed-dispersers for the shrubs. It is a mutualistic relationship, in which the lizards use the shrubs not only as a food source, but also as a second home [1]. The lizard eats the fruits that D. rodriguezii produces, and it also uses the shrub as a home, keeping it out of sight from other predators and the hot sun [2]. In return, the shrub gets the benefit of having the lizards disperse their seeds for them. They are then better able to spread their offspring to other areas [3].
However, P. lilfordi also has other priorities and responsibilities on the ecosystem found on the Balearic Islands. It is also a pollinator of the aroid Dracunculus muscivorus, and a seed disperser for Withania frutescens and Phillyrea media [1]. 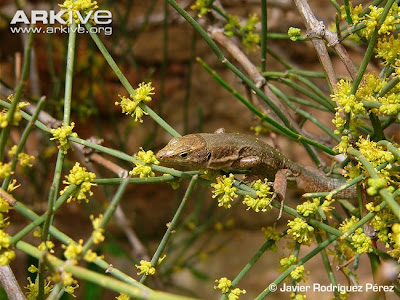