Introduction:
Paramecium bursaria, found in almost all kinds of freshwater habitats, is a species of ciliate protozoan that has a mutualistic symbiotic relationship with green alga called Chlorella. Whereas natural populations of P. bursaria are known, their Chorella-bearing counterparts are commoner in natural habitats. The algae live inside the paramecium in its cytoplasm and provide it with food, while the paramecium provides the alga with movement and protection [1]. P. bursaria is 80-150 μm long, with a wide oral groove, two contractile vacuoles, and a single micronucleus as well as a single macronucleus [1]. P. bursaria is the only species of paramecium that forms symbiotic relationships with algae, and is often used in biology classrooms as examples of protozoans, and as examples of symbiosis.

Green algae may be unicellular, multicellular, colonial, or coenocytic. They have membrane-bound chloroplasts and nuclei. Most green algae are aquatic; specifically, Chlorella is found commonly in freshwater where populations of P. bursaria are also found. Chlorella, a genus of unicellular green alga with about 100 species, is grown like yeast in bioreactors, where it has a very rapid life history [2]. It may be taken in the form of tablets or capsules, or added to foods such as pasta or cookies [2]. Taken in any form, it is said improve the nutritional quality of a daily diet [2]. According to the Taiwan Chlorella Manufacturing Company, the increase in processed and refined foods in the diet of modern man make Chlorella an important food supplement for anyone interested in better health [2]. 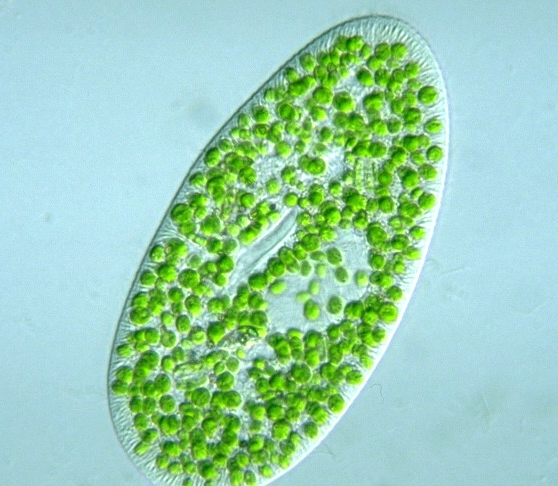 
Description of the Relationship:

The symbiosis between the ciliate Paramecium bursaria and representatives of the green algae Chorella is a good example of a facultative mutualistic interaction. Among ciliate Paramecium species, only P. bursaria can maintain endosymbiotic algae in the cytoplasm [3]. In fact, algae-free P. bursaria cells hardly ever exist in natural environments. Typically, P. bursaria harbor several hundred symbiotic algae in their cytoplasm. The algae live inside the cytoplasm of P. bursaria and provide it with food, while in return, P. bursaria provides the algae with movement and protection (as depicted in the video below).

A paper published by Sommaruga and Sommtag discussed the “classical” view of mutual benefits between P. bursaria and Chlorella as the efficient transfer of inorganic elements from the paramecium to the algae and of photosynthate leaking from the endosymbionts to the host [3]. Chlorella excrete large concentrations of carbohydrates used by P. bursaria to maintain its metabolism, allowing P. bursaria to become partially or totally independent of external food supply [3]. In return, the P. bursaria provides respiratory CO2  that can be photosynthetically fixed by Chlorella [3].

As mentioned briefly above, the mutualistic relationship between P. bursaria and Chlorella is pretty straightforward. Serving as the host, Paramecium bursaria can supply algal cells with nitrogen components and CO2 [4]. Furthermore, when within the host, the host protects algae from infection of the Chlorella virus [4]. Also, algal carbon fixation is enhanced in the host. On the other hand, the algae can supply the host with a photosynthetic product, maltose [4]. The algae in the host show a higher rate of photosynthetic oxygen production than in the isolated stated, thereby guaranteeing an oxygen supply for the host in return [4]. It has been proven that algae-bearing P. bursaria can grow better than non-algae-bearing cells. The algae have a photo-protective role for the host [4]. Furthermore, photosynthetic products of symbiotic Chlorella are related closely to the expression of circadian rhythms in host P. bursaria [4]. Timing of cell divisions of both the algae and the host cells is well coordinated [4].