The trematode Ribeiroia ondatrae could be considered the                  Dr. Frankenstein of the parasitic realm as many of its intermediate hosts suffer from monstrous malformations. Found prominently throughout the United States and the rest of North America, R. ondatrae infects three distinct hosts at different points in its life cycle that can include: planorbid snails, amphibians, and mammals or birds [1]. While the parasite does not pathogenically affect its definitive hosts, mammals or birds, it is the source of bizarre limb mutations in amphibians and the reason for infertility in its mollusk hosts [2,3]. While environmental factors play a very clear role in the vitality of many amphibians, many  scientists are concerned with the even more severe declines in amphibian populations due to infection by R. ondatrae [3,4]. Simply put, a frog with five legs will most certainly not win the race when it comes to avoiding predators. 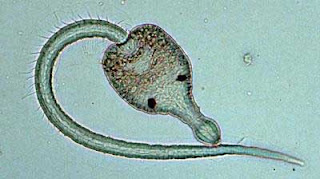 Ribeiroia ondatrae is a trematode in the phylum Platyhelminthes [1]. Like most trematode parasites, it cycles through six distinct morphological forms including: egg, miracidia, rediae, cercariae, metacercariae and adult form [1]. The parasite is able to thrive in a wide array of aquatic habitats, which is perhaps what makes its rate of infection so high. For example, R. ondatrae can live in ephemeral ponds, lakes, stock ponds, and even drainage canals—anywhere that freshwater is found [3]. R. ondatrae goes through both sexual and asexual reproduction depending on the host (i.e., intermediate or definitive). The adult parasite ranges from 5,200 to 500 μm in size, similar to other trematodes of the same genus [1]. Perhaps it is the parasite's morphological simplicity and small size that makes the organism's effects so ominous.

R. ondatrae requires three distinct hosts to complete its full life cycle. The first intermediate host includes planorbid snail genera Planorbella and Biomphalaria [1,3]. These particular snails are aquatic mollusks with a “ram’s horn” shape [1]. The second intermediate host can include several different amphibians such as frogs, toads, and salamanders. Infection rates in some populations of frogs, such as tree frogs, can be as high as 95% [2]. The third, and definitive host, can include both mammals and birds—any organism that preys on the amphibian intermediate hosts and can provide a suitable habitat with adequate resources for the parasite’s metacercariae to develop into the sexually mature, adult form [3]. 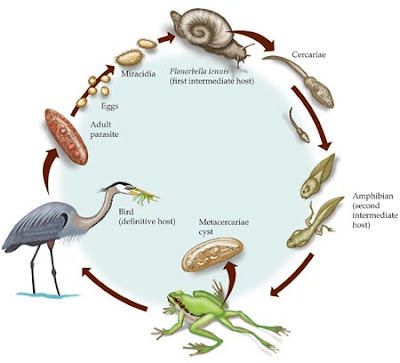 The eggs of R. ondatrae are dispatched into an aquatic environment through the feces of the definitive host (mammal or bird). The eggs develop into aquatic miracidia which are free-swimming, larval stages of the parasite [3]. These miracidia utilize apical glands and penetration to infect the first intermediate hosts, the planorbid snails, which provide a suitable environment, generally in the renal glands or pulmonary veins, for the miracidia to develop into rediae that undergo asexual reproduction in a sporocyst [3]. Often, these daughter rediae accumulate at the birth pore and may strip the mollusks of their reproductive organs [2].

Expelled rediae develop into free-swimming, larval cercariae, which infect larvae of nearby amphibians [1]. These cercariae seek out areas of the morphology of the amphibian larvae that will eventually form the hindlimbs. Some scientists describe the embedding of subcutaneous cercariae, and later metacercariae, into the host amphibian as “jamm[ing] a golf ball into the space where the limb goes” [2]. As the host matures and undergoes metamorphosis, the metacercariae cause the host to form an increase in the number of limbs present, called supernumerary limbs [3].

With an increase in the number of limbs present, the frogs are less adapted to avoid predation by birds and mammals, which are the definitive hosts of S. ondatrae. After consuming the amphibian hosts and thus, the parasite, the trematode is able to mature in the digestive tract and undergo sexual reproduction as the adult form [1]. The cycle begins again once the bird or mammal releases the eggs of the parasite into an aquatic environment by means of its own feces.

Obviously, through the deformation it causes in its amphibian hosts, S. ondatrae severely affects the abundance and distribution of these organisms in their environment. In the general population of amphibians, especially in frogs, there is a certain level of “background abnormalities” which range from missing digits or portions of limbs and constitutes approximately 0 to 5% of any given population [3]. Abnormalities in frogs can be associated with a variety of causes such as the presence of heavy metals or pesticides [4]. However, recent research has indicated that the presence of S. ondatrae is by far the best indicator of high rates of mutation in these amphibians. Because infections by this parasite have significantly increased in recent years due to excessive nitrogen runoff (which feeds a larger number of intermediate snail hosts), it may serve as another environmental indicator that something is not right [4].

Besides causing an adverse effect on the populations of amphibians across the United States, the infection in snails can lead to certain human benefits. For example, infection by S. ondatrae in Biomphalaria glabrata, a planorbid snail, can cause the host's complete elimination. Consequently, B. glabrata is a prominent host in the life cycle of human schistosomes causing a reduction in that particular human parasite. Similarly, the rediae of S. ondatrae consume schistosome sporocytes of Schistosoma mansoni, one of the most widespread parasites causing human schistosomes and thus, reducing the incidence of the disease [1].

An example of an extended phenotype:
http://www.cracked.com/funny-3001-ribeiroia/ 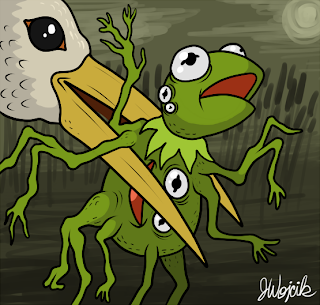 Although it is still unsure as to how the mechanism occurs in amphibians infected with S. ondatrae, the presence of these parasites causes the amphibian to produce a larger number of limbs than the genome of the host calls for. While the presence of the trematode parasite extends the phenotype of the host amphibian, it does not do so to the benefit of the host. As discussed earlier, the supernumerary limbs cause the organisms to be more likely eaten by a bird or mammal due to its inability to escape predation. However, by interfering with the genes of the host, the parasite increases its own chances of being transferred to the next host.

Some explanations as to why the presence of S. ondatrae causes an abnormal number of limbs in amphibians are linked to infection during the larval stage of the host. Since the cercariae infect the amphibians while it has not yet undergone metamorphosis, the presence of the parasite may mechanically alter the distribution of cells in the hindlimb region of the amphibians [2]. If this occurs,  the rapid growth and movement of cells during metamorphosis may cause signals that increase the number of limbs that the organism should produce.