Introduction
These pesky parasites are incredibly common in our world today, especially hotel and dorm rooms, yet their ability to hide and remain completely undetectable makes us unaware of their existence. Their infestation is not a result of a lack of our cleanliness, but simply a due to our necessity to sleep at night. Any given home can be crawling with up to 5,000 Cimex lectularius individuals at one time—many of which live inside the mattresses and bedding used daily. 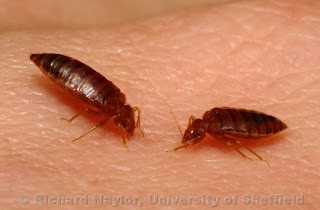 Symbiont Description
Cimex lectularius is in the phylum arthropoda and class insecta. They are small, flat, ovular insects and are usually a brown tint. However, after feeding on human blood C. lectularius tends to take on a red tint. They have no wings and therefore cannot fly, so these insects rely on their ability to crawl rapidly and their small size (up to ¼ inch long) to escape threats. An interesting characteristic of these creatures is their distinct scent. They release a foul odor as a form of defense, which is ironically a common way they are detected by humans. [1]

Host Description
Cimex lectularius are completely depended on warm-blooded animals for survival; particularly humans. Humans are their typical host of choice, but these insects also are known to feed on rodents, primates, rabbits, and household pets when available. Nymph (young) must consume blood in order to molt, therefore they are absolutely dependent on hosts for survival and reproduction. [2]

Life Cycle
These insects undergo incomplete metamorphosis. The typical life cycle begins when the female lays eggs in a cluster of about 50. [2] She coats these tiny, white eggs in a sticky substance that enables them to be attached to rough surfaces, like a wooden bed post. These eggs hatch within 1-2 weeks and a “Nymph,” or hatchling is released. The nymph must feed on mammal blood in order to molt, or shed its exoskeleton; therefore being close to a blood source is critical. Nymphs molt five times before reaching adulthood. This process of molting and maturing can take anywhere from three weeks to several months depending on availability of blood sources and temperature of the local environment. Extremely high and low temperatures slow or even halt development. [5]
After maturing to adulthood, Cimex lectularius usually lives for at least ten months and have been known to survive for up to several years. They locate humans, or other available hosts, by detecting exhaled CO2, body heat and moisture. Feeding most often occurs at night when hosts are asleep and most susceptible to attack. Once a host is sensed, the insect pierces its skin and injects anticoagulant salivary fluid to prevent the host blood from clotting during feeding. This fluid is what often causes the itching sensation after a bite. One host typically feeds several parasites. [4]
Adults mate in an incredibly unique and somewhat alarming manner, by a method called “traumatic insemination”. This is fairly common in species with open circulatory systems such as insects, but seems unnatural due to its harmful effect on the female. The male Cimex lectularius pierces his female counterpart’s abdomen and injects spermatozoa into her abdominal cavity. This is actually harmful to the female and results in serious injury, and sometimes death. Males usually prefer females who are engorged after feeding and a particular female may be inseminated up to five times after each meal. Over time this particular species of bed bug has formed a “mesospermalege” which serves as a directory of the male’s attack. This is a particular place on the female’s abdomen in which the male is able to pierce with reduced damage to the female. Directing his interest prevents the piercing from being carried out on more detrimental parts of the abdomen. After the female has been inseminated, the spermatozoa flow through the body cavity, or “haemocoel”, finally reaching the ovaries. Any particular female will lay about 12 eggs per day, up to about 200 in her lifetime. [4]
Because of the relative quickness of their reproduction, bed bugs can go from being a few harmless parasites to full out infestations, causing severe pain and itching to humans and other hosts. They are not easily located and exterminated because of their shy nature, small body size, and ability to rapidly reproduce. While it is definitely possible for these insects to act as vectors for harmful diseases, there has been no evidence supporting such cases. This may, however, be a result of their inconspicuous attacks and the lack of common knowledge about these animals. [5] 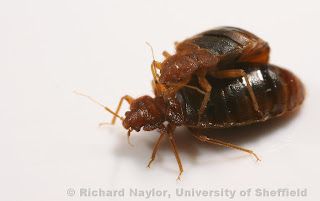 Ecology
Cimex lectularius is not known to transmit diseases to its host, but can cause discomfort and sometimes infection at the feeding site. Itchy, red spots, similar to that of a mosquito or other insect bite are common. Because of their ability to remain unnoticed for long amounts of time, these insect bites are often mistaken for mosquito bites and regarded as isolated incidences. However, recurring bites, especially those initially present in the mornings can often be attributed to these bed bugs.
Treatment consists of thorough cleaning by use of intense heat or cold, or in severe cases, the use of insecticides. At home insecticides are not usually successful against these insects because they have evolved to become immune to such treatments; therefore professionals are usually necessary in order to treat infestations.
Not only are professionals required for treatment, but also are often necessary for detection of these insects. Because of their nocturnal habits, these individuals are difficult to detect and often go completely unnoticed. [1] They usually live close to beds or sleeping areas of hosts, but will travel several feet to reach a host if there is not a proper hiding place close by. They prefer to live on ridged materials like wood, and can often be found in nightstands, headboards, wallpaper, box springs, and even bedding. Up to 5000 of these creatures can survive in one bed, but most cases consist of 50 to 200 bugs per household. [5]

An example of the encounter filter opening as a result of change in the biodiversity parameter
In recent years the human encounter filter for Cimex lectularius has drastically increased with respect to their human hosts. Cases of infestations have become much more prevalent than every before in homes across North America, Europe, Australia and China. These insects used to be most concentrated in developing countries but have had more opportunities to encounter new hosts in a variety of locations thanks to an increase in globalization. Because bed bugs are common in hotels, hostels and other places of temporary residence, they can easily hitchhike with travelers via clothing or luggage and move to entirely new environments miles away from their origin. [3] Before today’s transportation opportunities, these pesky parasites had little opportunity for relocating and encountering new hosts and environments.