Mudpies As A Defense?

A little background for you . . .
Alright, we are no longer young children out here making mudpies and eating dirt. However, what if eating small amounts of dirt could lessen the impacts of side effects from parasites and make us healthier against them? So what if we ingest a few parasites in the process, as Zuk says: “remember, the idea that we- or any other organism- should be completely parasite-free is a modern invention, not a natural state of affairs.”[1] The concept of geophagy, or eating dirt or clay like materials, has been around for centuries amongst animals and humans alike. Research has shown both positive and negative effects on the body and on the protection from parasites from eating small amounts of dirt consistently. However, we must question, why dirt? When first thinking about dirt, soil, or Georgia red clay for instance, one does not typically think that it would be a desired food. However, dirt with high amounts of clay contain high amounts of minerals such as calcium. Studies have shown that geophagy is a common practice among children and pregnant women in rural areas where proper healthcare and nutrition are lacking.[2] The origins of this practice date back to various tribes and cultural practices across the world on all continents from centuries ago. Some site homesickness, or desire to regain lost nutrients as a cause for eating dirt. Others often use it for medicinal purposes since it has anti-diarrheal properties. Pregnant women often use it as a home remedy for morning sickness.[4] A common practice is for the soil to be mixed with other things and then baked. It is common to find baked soil in local rural stores. Some cultures use dirt and clay as food when they do not have enough, although the nutritional value is very low.

So is this safe?
Not exactly, with eating dirt many risks arise. There are many STH’s (soil transmitted helminthes) that can live dormant in soil for years such as roundworm eggs. Additionally, most STH eggs are passed through human feces. In rural areas without proper plumbing and running water, defecation takes place in the dirt. Infected individuals would then be passing the eggs through the stool into the dirt, which over time could wash away, however still leaving the eggs behind. When the dirt is collected for consumption, albeit small amounts, the eggs are also collected and can be transferred once eaten.
[7]

So the benefits are?
For centuries pregnant women have eaten soil as a way to retrieve necessary nutrients that is shared with the fetus during pregnancy. Some cultures have been known to use certain types of soil in medicine. Keep in mind, were not talking the average potting soil you can find in the stores. We are talking about soil high in clay levels. Clay has been known to have adsorbing characteristics that help in removing toxins from the body. [3] For centuries, those without access to proper healthcare or those who could not afford healthcare turned to clays and soils as a way to help detox their bodies and keep them safe. Colloidal clays, such as those used for medicinal purposes, have been found to have anti-diarhheal properties. [3] 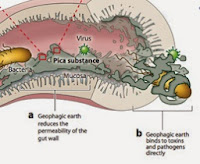 [8]
This is where we see the benefits for parasites. As we have learned in class, a common side effect of any parasitic infection is diarrhea. Therefore, the side effects are reduced. As mentioned above by Zuk, humans are expected to have a few parasites. Having low amounts of parasites allows our innate immunity to build a response to them. In that case, the parasite load is not enough to cause a full-blown infection, but enough for our body to realize that they are a toxin and must be protected against.

Still not convinced?
We all have probably eaten dirt at one point in our life, whether it be through playing outside, or having vegetables and fruits that were not completely clean. With that being said, I am not saying go outside and eat a handful of dirt. Not exactly a good idea, but small amounts every now and then are not completely bad. The amount of parasites you may get by eating small amounts of dirt as children, or as adults are typically not enough to cause infection, unless dirt is eaten daily.