The Blinding Effects of Onchocerca volvulus

[2]
Introduction to Onchocerca volvulus:
Onchocerca volvulus is a parasitic nematode that infects humans via epidermal penetration from female black flies (Simulium), and causes the disease known as Onchocerciasis, or "River Blindness." [1] The majority of infections from O.volvulus occur in regions of West Africa; however, some cases have been discovered in sub-Sahara Africa, Mexico, Venzuela, Guatemala, and Ecuador. Although infection from O. volvulus is not fatal, reactions to this parasite can be quite unpleasant and painful.[3] These reactions include destruction of the elastic tissue and formation of redundant folds in the skin, loss of pigmentation, and in the most extreme cases, the skin of the host resembles the skin of a very old normal subject. [2] O.volvulus also causes long-term corneal inflammation, or Keratitis, and thickening of the corneal stroma, which leads to permanent blindness. [1] Onchocerciasis cannot be prevented or cured; however, available medicine can offer short-term pain relief.[4]
Description of Onchocerca volvulus:
O. volvulus is part of the family Onchocercidae in the order of Spirurida, which targets humans through transfer from its vector host, the female black fly. In its vector host, O. volvulus is usually found in the saliva within the proboscis so that when the female fly lands on a human for its "blood meal," O. volvulus can be transferred into the blood of the host. Once the parasite enters the blood of the primary host, it migrates to the subcutaneous tissue where it forms painful nodules that are visible through the skin. [1] O. volvulus can also enter the eyes of the host through the ciliary vessels and nerves under the bulbar conjunctiva into the cornea and the optic nerve; however, the major reactions of O.volvulus do not occur until after the death of the parasite. Once the parasite dies it causes an inflammatory immune response within the host and formation of secondary cataracts and ocular lesions, leading to progressive blindness. It also causes inflammation of regional lymph nodes, causing the nodes to protrude and enfold into pockets of skin. Extreme cases of this can be classified as minor elephantiasis. O. volvulus microfilariae, the beginning larval stage, measure 300 mm in length and 0.8mm in diameter, and contain sharply pointed, curved tails. [2]
[2] 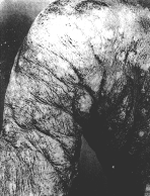 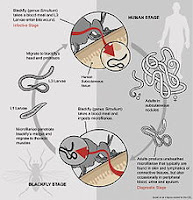 O. volvulus cannot survive in the outside environment; therefore it constantly remains within a host, whether it be the black fly or a human. This parasite causes no harm to the intermediate host and only causes harm to its primary host after the parasite's death. Upon dying the parasite causes inflammation in various areas of the human body, producing nodules that protrude from the skin. This inflammatory response also causes damage to the optical nerves, causing blindness, which is the origin of the disease's name. As previously stated, there is no preventative vaccine or cure for the disease caused by this parasite, but medicine can be taken to temporarily alleviate the pain. [2]

An example of Onchcerca volvulus tranmission and relation to slavery:

O. volvulus is transmitted from human to human through the bites of black flies. Although the majority of the infections still occur in Western and Central Africa, the parasite and the debilitating disease it causes has migrated to other countries, such as those located in South and Central America. This migration is thought to be the result of the slave trade from Africa to these countries in South and Central America. [3] Other diseases that came over with slavery killed many slaves before landing in the New World, reducing the spread and effects of those diseases;however, the disease caused by the aforementioned parasite is not fatal so it was successfully transferred to inhabitants of the New World, causing this debilitating disease to spread to those who forced the Africans into slavery. So, while this parasite is certainly not the cause of the slave trade from Africa, it could be seen as a form of unintentional retaliation from those forced into slavery, and an example of how a small parasite can somewhat alter society and history.